Brazilian Viking metal mainstays, Armored Dawn continue to dominate their local scene, not to mention leave a sizeable impact abroad. The Sao Paulo-based bangers dropped their third and latest release, the eleven-song Viking Zombie, on October 18, 2019, and, now, are set to follow it up with a Deluxe Edition on March 20th, via The Orchard/Sony.

Vocalist Eduardo Parras, bassist Heros Trench, keyboardist Rafael Agostino, guitarists Timo Kaarkoski and Tiago de Moura, and drummer Rodrigo Oliveira, recorded Viking Zombie in their hometown with production coming from the band’s own Oliveira and Trench. The new deluxe edition includes three extra songs, each of which the group outlines below in this exclusive track-by-track breakdown of the jams found on the snarling beast that is Viking Zombie!

1. “Ragnarok”
“It was the first single and video of this album we released, but the last one to be composed and recorded. Actually, we already had the album nearly done when the inspiration for this song came. It’s the only track in the album that counted on other musicians for the composition. In the end, we liked it so so much that we couldn’t leave it out of the album, and decided to release it before the others, as we said.”

2. “Animal Uncaged”
“In our opinion, ‘Animal Uncaged’ has the heaviest and the most beautiful riff of this album. It’s so heavy that as you can see in the videoclip, Rafael (keyboards) plays one of the guitars. The initial idea came from Rodrigo (drums) and Heros (bass) created some riffs. Its video was recorded at one of the most special moments in our career, when we played at RockFest, a festival that happened in September 2019, in Sao Paulo, where also played Europe, Helloween, Whitesnake and Scorpions. It was outstanding!”

3. “Zombie Viking”
“It’s the last single we released, and there’s also a video for it. ‘Zombie Viking’ is the reflection of some new influences in our work, it’s so true that it is the track that differs most from our last album. It was an extreme change, it’a a song that has no guitar solo and any drum fill, entirely different from the work we’ve been doing all these years, especially because it started being composed from the voice line. It’s probably one of our favorites in the album and one of the songs we liked most to record in relation to the concept and the composition itself, so much so it turned the central theme of the album.”

4. “Fire and Flames”
“The fastest track in the album. At the same time, it’s one with the most melodic chorus. The vocals are melodic and aggressive. The intro is kind of mysterious and the part C riff is one of our favorites because it refers to Thrash Metal, what is a clear reference of Rodrigo (drums) and Heros (bass).”

5. “The Eyes of the Wolves”
“This song is probably the one that most reminds the songs from our last album, Barbarians in Black, it’s heavier than the other ones in the new album. It’s played in triplet (waltz style). Tiago (guitars) brought this idea and not all of us liked it at first, but as we were working on the song, we got convinced by his idea. When we play this song alive, we use to extend the final part of it and gets really ‘metal’!”

6. “Face to Face”
“This track has one of the most beautiful guitar solos and the coolest breakdown of the entire album. It was the first song to be composed, and we made the composition and recorded its demo at once. We think that the song expresses defiance and the melodies show bravery, somehow encouraging the listeners to fight for their ideals.”

7. “Drowning”
“One of the two ballads of the album, and the most emotional. It’s a very beautiful composition. We think it reminds many ballads recorded by metal bands in the beginning of the ‘90s. The music is very melancholic, and we wanted to pass all this feeling in the lyrics too. In the chorus, there’s a female vocal, and for that, we counted on the participation of Juliana Rossi. In our opinion, her participation was crucial to make the track even more beautiful and full of emotion.”

8. “Heads Are Rolling”
“It’s one of the most performing songs live, our public really get thrilled by this song. As you can see, it’s also the most feared by our crew due to its name LOL. Well, this song has a strong guitar theme and a frenetic intro created by Rafael (keyboards). Certainly, it is one of the heaviest tracks in the album, and we’re sure that its remarkable chorus has surprised the listeners a lot.”

9. “Blood On Blood”
“‘Blood on Blood’ is a track more modern, as direct and objective as possible, there’s no pre-chorus. The intro is more technical. All the music has a different dynamic, and the chorus is very catchy.”

10. “Embrace The Silence”
“That’s the other ballad of the album, it has much more energy than ‘Drowning.’ It’s Eduardo’s (vocals) favorite track, it was composed from a melody that he played in the piano, and from this, Tiago (guitar solo) created the guitar lines. All guitars and keyboards in this song bring a very interesting and calm atmosphere. It’s a moment for the listener to take a deep breath before the next song.”

11. “Rain On Fire”
“That’s Rodrigo’s (drums) favorite one, he even recorded the guttural vocals in the beginning of the song. In general, it’s also one of the favorites of all members. It’s a contrast between the heaviness and the melodic keyboards lines. The drums are amazing and the guitars, very energic, and it’s so true that is the song we chose to end our shows.”

12. “Skydiver Of The Light”*
“This track has a particular significance for us. It was one of the first songs we composed for this album, but at the end of the pre-production, we had to select which songs would be recorded and this one wasn’t chosen.
Unfortunately, at the end of 2019, our light engineer, who was a skydiver, had an accident in a parachute jump, and died. So, immediately we decided to pay a tribute to him and wrote new lyrics for this song. When we first heard it ready, was a moment full of emotion… This song is the way we found to thank him for his friendship and for being such a great person.”

13. “Ragnarok (Unplugged)”*
“We’ve made accoustic versions of songs from our last album, Barbarians in Black. It was just a trial, we were looking for different things, and we really liked the result. After that, we decided to choose one song or another to do the same. This unplugged version of ‘Ragnarok’ was so well accepted by the listeners that has been in the first place of the most requested songs in a big radio here in Brazil.”

14. “Animal Uncaged (Live)”*
“This version for ‘Animal Uncaged’ was chosen because it’s from our live performance at RockFest. That show was very special to us, we had an amazing public’s response, we got really surprised. We also released a video of this song, which was shot at the festival.” 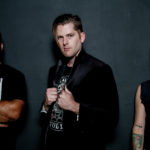 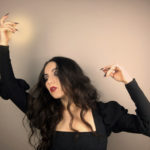