The summer of 1990 — the last gasp of arena rock glory. Among the menagerie of aerosol-sprayed anthems igniting radio and MTV airwaves — “Cherry Pie,” “Unskinny Bop,” “Same Ol’ Situation” and “Fly to the Angels” — the irresistible power ballad from newly-minted poster boys, Slaughter.

It’s a crazy story — a real life rock and roll fairy tale. In 1986, former KISS guitarist Vinnie Vincent released the debut LP from his new project, The Invasion. In 1988, he dropped his group’s sophomore set. While the band made something of a splash, it failed to catch fire fully. As a reported result of sluggish sales and excessive expenses, Vincent ultimately was handed his “walking papers” by Chrysalis Records. And in short order, the Invasion’s multi-million dollar major label deal was passed off to the band’s celebrated established bassist, Dana Strum and charismatic young frontman, Mark Slaughter. The mission — build a band that bites and write a record that rocks.

Strum and Slaughter found themselves signed to a lucrative record contract before their new band ever played a gig. In fact, at the time, there wasn’t even a band at all. Jersey-born guitar ace, Tim Kelly (d. 1998) and Texas-based powerhouse drummer, Blas Elias soon were recruited to complete the combo. The pressure was on to deliver. And 30 years ago this month (January 23, 1990), the self-produced Stick It to Ya arrived in stores worldwide. Within mere months, the just-assembled ensemble, Slaughter, had ascended to dizzying heights on the international rock scene — achieving Top 20, double-platinum status.

This Slaughter tune will keep you “Up All Night.”

While the band possessed plenty of boy-next-door appeal, the blue jean-clad brigade also delivered a distinctive edge. Bursting with Tim Kelly’s ball-busting, urgent riffage and driven by Mark Slaughter’s uncompromising confidence, the opening track, “Eye to Eye,” set the stage with fire and fury — Ready or not, here we come. Gonna set this town alive. The boys are ready. We’re out to rock. Gonna turn it up tonight. Reflecting on Strum and Slaughter’s less than positive past experiences with their previous employer, “Burning Bridges” packs equal punch — a record highlight, for sure.

What set Slaughter’s sizzling debut apart from other new rock releases in 1990 was it oozed incredibly well-crafted songs — from start to finish. In fact, Stick It to Ya birthed four impressive, wildly popular video singles — the high-energy, sing-along party staple, “Up All Night,” the infectious, “Spend My Life” and the groove-laden, “Mad About You,” as well as the aforementioned super-hit ballad, “Fly to the Angels.”

However, many of the record’s deeper cuts also deserved massive props. “She Wants More” spewed immeasurable cock rock swagger with “Whole Lotta Rosie”-caliber cred, while “Gave Me Your Heart” owned a Buick-sized hook and “Loaded Gun” was chock-full of rib-cracking chords and wise words of rock star wisdom regarding the pursuit of “ordinary girls” — Cold as fire with shotgun in her eyes. She’s got notches in her belt from the other guys.

In sum, it was arguably THE rock party soundtrack album of 1990 — one of the last great arena-sized records to slip through the gate before Cobain slammed it shut just 18 months later. And for those who still crave the sonic seductions of those day, Stick It to Ya still sticks with ya.

A publicity photo of Slaughter circa 1990, the year Stick It to Ya was released. 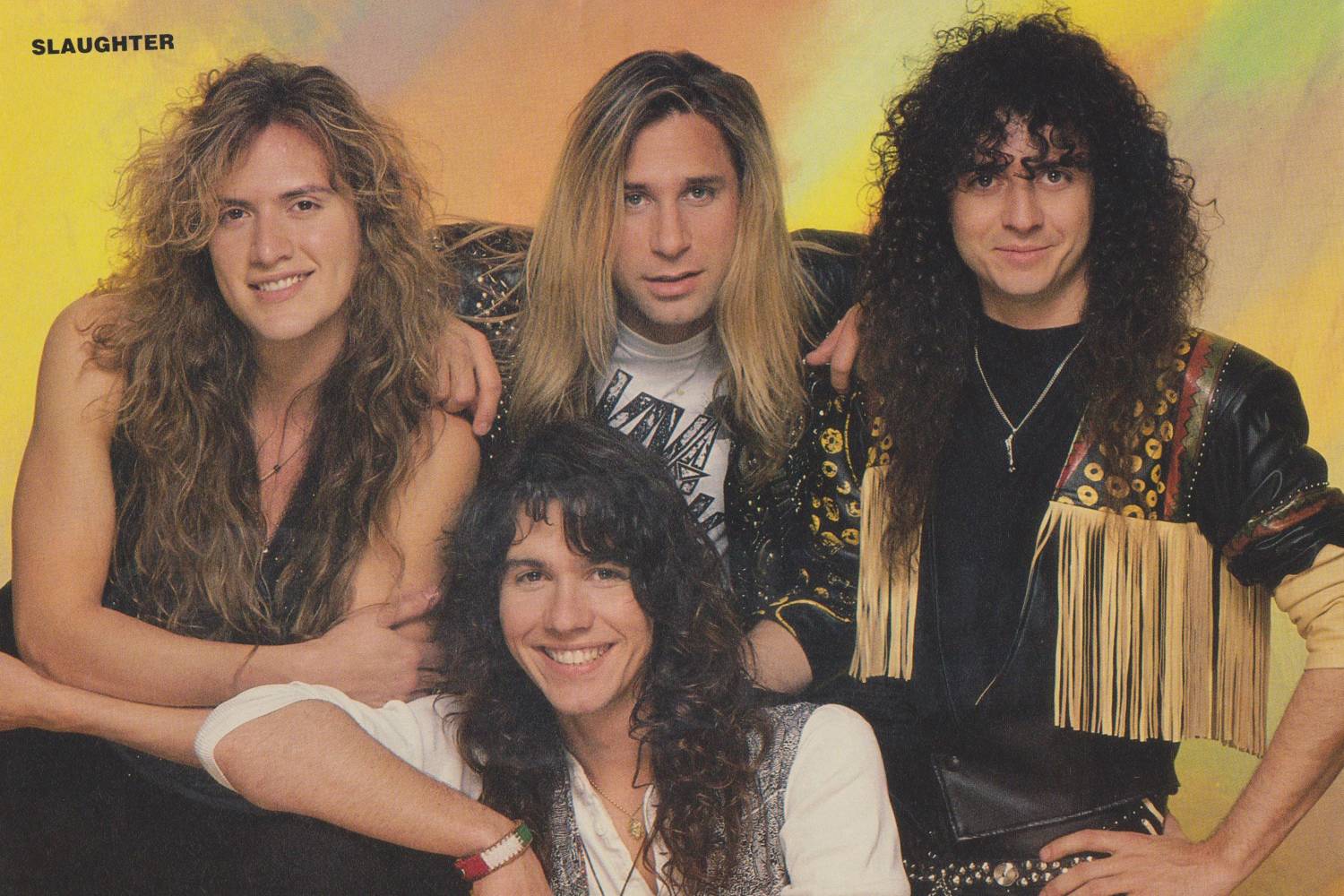 Stick It to Ya Track Listing:

The video for the super-hit ballad, “Fly to the Angels.”