Exorcisms of Eroticism acts as the follow-up to the extremely successful Mournography EP, released last year. The six new tracks capture a succinct balance between heavy and catchy, never straying too far into the heavy while not just pumping out typical radio fare. The album opener “Pandaemonium” sets the tone for what’s to come, with airy synths hovering over a dynamic rhythm section and an epic guitar solo that stands out among the best moments. “Beyond The Veil” puts on display a softer side to Her Despair, acting as a pseudo-ballad arriving at the perfect time when a mellower moment is needed. Each of the six tracks carries with them their own personality, most notable in the choruses and solos. Exorcisms of Eroticism is the large step up that Her Despair was ready to take and illustrates why they are one of today’s most notable goth rock groups.

With some words of his own, Her Despair vocalist J is here to enlighten us more about the music video that goes along with “The Exorcism,” the groups that he grew up on that influenced the band’s gothic rock sound, and a preview of what’s to come on with the release of next month’s Exorcisms of Eroticism.

Check out the visualizer video that goes along with the song “Valentine’s Mourning,” off of last year’s Mournography:

Your music video for “The Exorcism” is a pretty awesome performance-driven video that goes above and beyond typical performance videos. Where did you shoot the video and how long was the shooting process in total?

J: “Thank you for the kind words! We shot the video over two days in the haunted city of Southampton, where the Titanic began its ill-fated voyage. We worked with the inimitable Scott Chalmers, shooting in his studio on day one and a nearby establishment for day two which provided an entirely black room with no natural light, a perfect backdrop for our bleak music. Unfortunately, the shooting process was held up slightly on day two after our smoke machines set off the fire alarms (despite assurances they had been disabled), resulting in a brief visit from the fire service…”

There seems to be something of a concept behind the performance aspects of the video, but I’m not certain of what that concept may entail. Can you take us behind-the-scenes of how this video was initially conceived?

J: “There are vague concepts of exorcisms and eroticism throughout, but our main focus was for something visually stimulating. We wanted ethereal lighting through endless volumes of smoke whilst incorporating suitably funereal imagery, which we feel was accomplished. The creative process on both days was very spontaneous and organic, ‘does this look good? Then let’s do it.’ Very quickly the lighting became deep red and took on a far more sinister tone, giving parts of the video qualities of a horror film. We just went with it as it happened, and are delighted with the result.”

There’s a real ‘80s gothic vibe within the song as well as the music video. What bands did you grow up listening to from which you got the inspiration for not only this song, but your general band sound?

J: “Our main influence will always be The Sisters of Mercy. The first time I heard them around the age of 14, it redefined everything that music could be. Other bands and artists that are particularly influential would include Nick Cave, My Dying Bride, Elvis and HIM. They are acts who have remained a constant in my life and to whom I pray for songwriting inspiration, although on this release we tried to broaden our horizons. Regarding this song, the gothic dance crossover style that Suspiria perfected was definitely an enormous influence. We wanted to write a song that was suitably hard-hitting but would also get the dance floor moving.”

Exorcisms of Eroticism is due out on November 22nd. Check out the artwork: 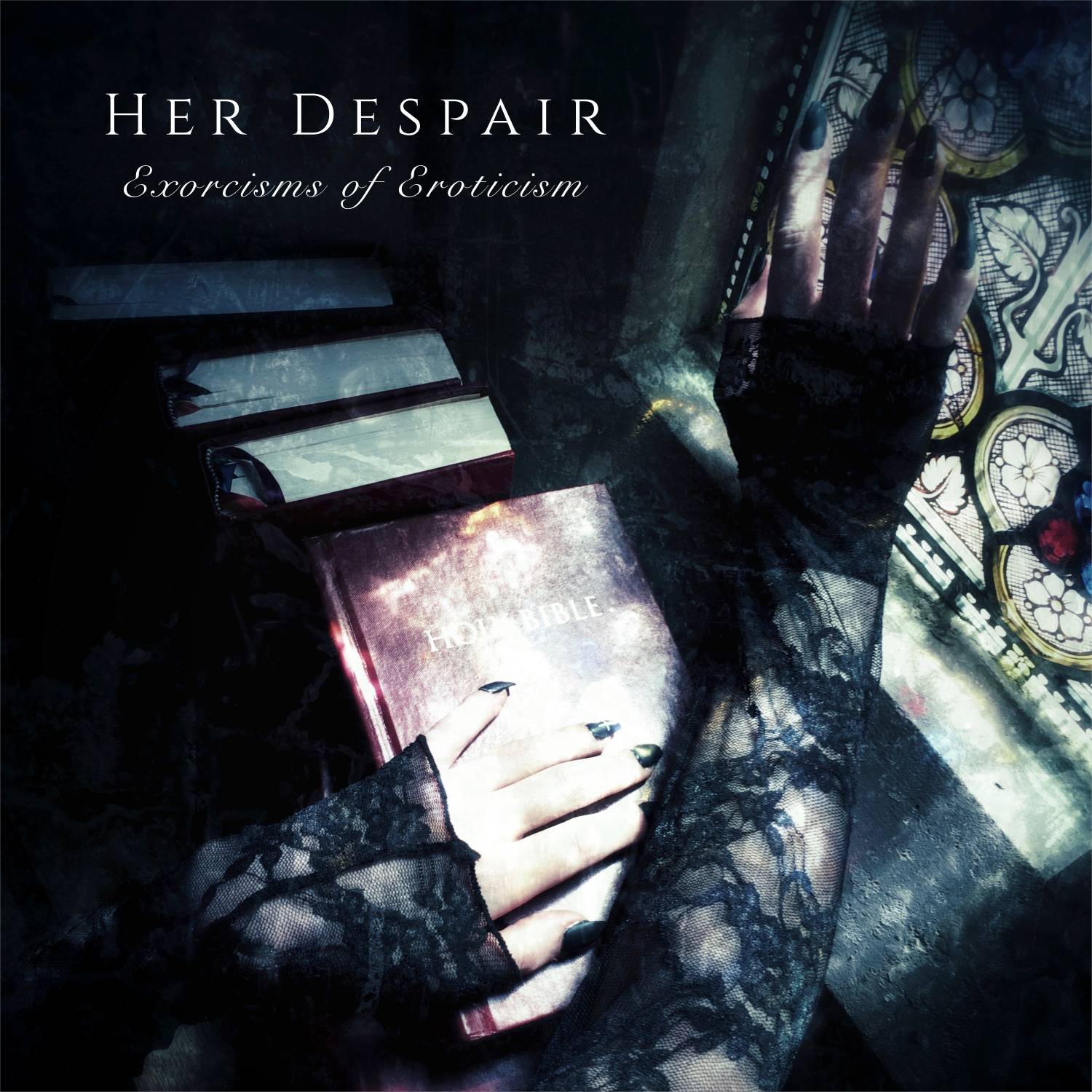 “The Exorcism” can be found on your upcoming EP Exorcisms of Eroticism, due out next month. What can we expect from the EP? Will there be more songs in the sound and style of “The Exorcism?”

J: “Musically, it’s our most ambitious and diverse release yet. We draw on the usual influences such as the Sisters and Rammstein, but with a few moments of gospel and ‘80s synth. The huge guitar chords are still there, but the keyboard melodies often take center-stage with dramatic flourishes of strings and all of that excitement. ‘The Exorcism’ is a fairly unique song within the EP predominantly due to the particular synth tones, but there are other moments that draw on similar instrumentation. The songs themselves are quite varied. We used acoustic guitars for the first time, and whilst they are all unmistakably Her Despair, some are very different from anything we’ve done before.”

Your last release was your 2018 EP Mournography. What did you go into the writing and recording process for Exorcisms of Eroticisms wanting to create and how did that vision change (if at all) as you got further into the process?

J: “We wanted to create something which was very dark, but occasionally enveloped in light. I’ve always liked that dichotomy. The word ‘dichotomy’ sums up the whole record fairly well, it’s full of elements that should not work together but somehow do. The deeper down the spiral we fell, the more detailed the songs became. We feel there is much MORE to this release. The songs are bigger, they’re more exciting, the songwriting has improved, and we’ve all developed further as musicians. The lyrics came to me in fragments, like snowflakes. They would appear then disappear in an instant; sometimes fully formed, sometimes a few lines here, a few words there. Moments of enlightenment, or something like that. Sometimes they would be about God, sometimes they would be about sex. There have been a few edits to them, but they’re essentially the same as when they first materialized. Some of them have meaning, some of them do not.”