Consisting of musicians Chris Tapp (guitar and vocals) and Brian Mullins (drums), Evansville Indiana’s The Cold Stares play some unavoidably catchy blues-rock that’s been turning heads at an increasing rate since the band’s inception in 2012. Today, as the duo continue to celebrate the October 18th release of their latest studio recording, WAYS, via AntiFragile Music (find pre-save/order options here), we’re thrilled to exclusively share Chris Tapp’s track-by-track rundown of each of the album’s thirteen stupendous songs.

Recorded at legendary Sam Phillips Recording Studio in Memphis, ‘WAYS‘ is a culmination of the various influences that make up the band’s unique sound. Two of the tracks released from the album so far have been chosen as “Track of the Week” in the UK’s Classic Rock Magazine and have been included on 10 major playlists across streaming platforms including Spotify‘s ‘All New Rock’, Apple Music‘s ‘Breaking Rock’ and Deezer‘s ‘La Grange: Blues Guitar Heroes’.

It is genuinely astonishing that a two-piece can create the layers and depth found in the music made by The Cold Stares. Speaking on his first live experience of the band, Nashville radio personality Dan Buckley says “The first time I saw them, I thought they had at least two other musicians secretly behind the curtain. There’s just no way that sound comes from the two of them.”

“This one I just really wanted to write a straight-ahead rocker that gave a nod to Zeppelin and the ‘70s rock giants musically. The song deals with an indecisive lover, and the dynamics of trying to be in a relationship with someone who can’t make up their mind.”

“On ‘Ways,’ we were trying to give a tip of the hat to a bit of old-school soul. I was listening to some Curtis Mayfield, and I just love that era of music where the different styles of rock and soul were blended, and real instruments were king. The subject of the song deals with a woman who’s had bad luck at every turn, and her man is trying to understand what has made her who she currently is–her ‘Ways.’”

“We were referencing a bit of Texas Blues, and wanted to put our spin on that era of Stevie Ray Vaughan and the Texas guitar slingers. Lyrically, I wanted it to be simple and straightforward and not over think it. Just a story of love gone wrong and betrayal.”

“‘White Girl’ is about addiction, and heroin specifically. Heroin has destroyed communities where we are from, and left the devastation of families behind it. We had done a benefit in 2015 for families of heroin addiction, and some of the stories were just permanently etched in my mind. Musically, I was taking cues from Mayfield’s ‘Pusherman’ and just trying to make it as heavy as the topic.” 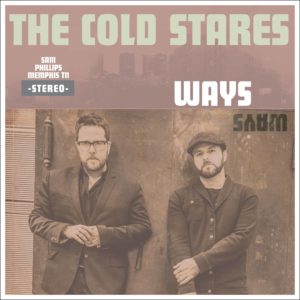 “‘Thorns’ is about healing from the loss of a loved one. I had my grandfather on my mind, and a close friend of the band had lost his daughter earlier this year. Lyrically, it’s one of my favorites on the album, and it took the longest to record and have a version I was content with. Lyrics were written in a few minutes, but I wanted the music to cradle them and not cover them.”

“‘Into Black’ is probably the heaviest track on the album, and the one that we had the longest. The track originally had a different title, but the sentiment was the same. Loving someone enough to go through whatever it takes to bring them back—even stepping off the edge of the world and through the gates of hell.”

“‘Down Again’ deals with depression and its impact on those that live with it. On this one, we wanted to do something a little different with the chorus so that it kind of matched the lyrics, and builds to show that every time the listener starts to climb back out, something turns them back ‘Down Again.’”

“This song’s subject is John the Baptist. I was always fascinated with stories of John when I was young, a wild man that lived in the wilderness and was just a rebel and outsider. I loved the dynamic between John and Jesus, and how John backed out of the way for Jesus’ ministry. This one builds as well, and if you pay attention, you have more footsteps through the entire song until we get to John meeting Jesus to baptize him. I’ve always loved the delta blues greats that could cover Saturday night and Sunday morning on the same record.”

“I had a friend that lost his lady, and basically went down into a hole. He wouldn’t leave his house for months and we finally had to break in and literally drag him out. ‘Going Down Easy’ is kind of his opus, about the peril of a man who’s finally thrown in the towel.”

“‘Angeline’ is the story of a bank robber who was left for dead by his gang in the desert. He makes it to a cabin where he’s healed by a woman that mysteriously disappears after he gains consciousness. With only a picture with a name on it, he spends the rest of his life searching for his angel.”

“I’m a big fan of Mark Lanegan, and lyrically this one is a mash of his influence on me and the early delta blues writers I love. A scorned lover has killed her husband, and even six feet in the ground he can’t escape her tormenting. I am always fascinated with ghosts, and the things left unseen.”

“I wrote ‘Might As Well Die’ after the album was turned in just as a song for my wife, that I might use to pitch later for tv or film licensing. I posted the song on our fan page and the response to it made our record label include it on the album. It’s filled with a bit of western noir and imagery from my fascination with western films, but in the end, it’s just an honest love song written about my wife.”

“The true story of a man who was friends with a criminal who left him some money upon his death. ‘Jackson Mississippi’ follows the story of the money and the decisions the man makes that change his life. Not giving the story away on this one… take a listen.”