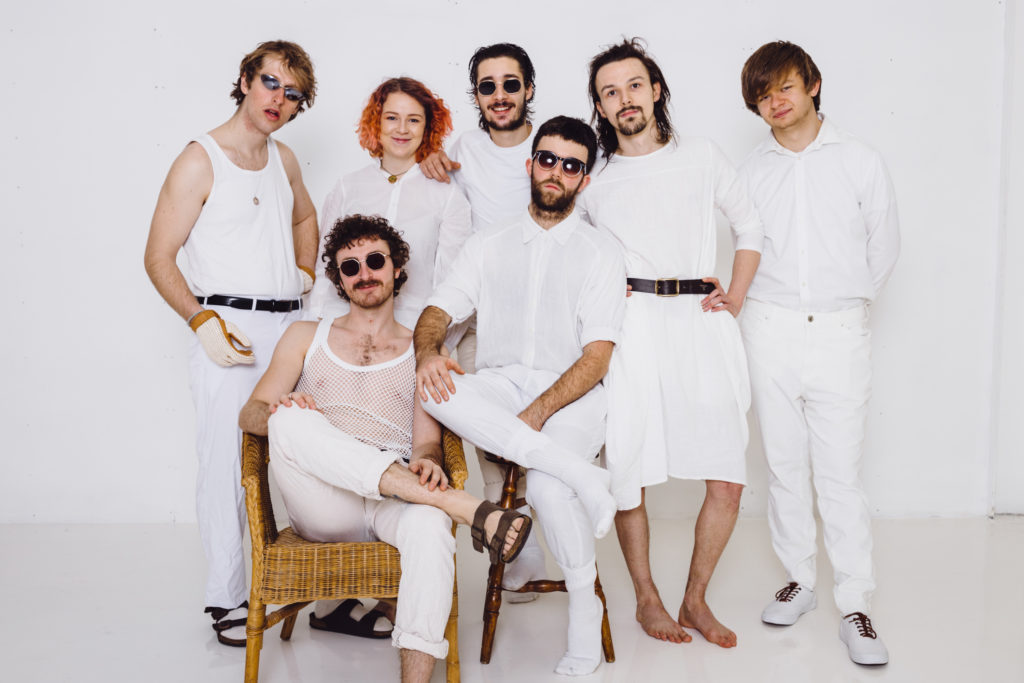 With praise from esteemed sources the likes of Pink Wafer Club, BBC Radio 6 and BBC Introducing, don’t just take our word for it that Manchester, UK’s psych-jazz seven-piece Bethlehem Casuals is deserving of your time and attention. The hard-working group—consisting of musicians William Hearne, Awen Blandford, Pip Sayers, Joe Woodhouse, George Burrage, Atanas Dochev, and William Graham—melds all sorts of musical influences into a single pot, stewing until perfectly seasoned. The end result is a mixture of jazz, psychedelic, folk, tribal drums, and more that is as odd as it is logical.

Take the band’s exceptional music and combine it with both a relaxed, “music for music’s sake” attitude and electrifying live show, and it is no wonder Bethlehem Casuals have already performed for audiences at major festivals the likes of Bluedot, Kendal Calling, and Manchester Jazz.

Today, to help further spread the septet’s stupendous sound, we’re joined by Pip Sayers who sheds light on the band’s brand new single “Change” which, according to them, follows the narrative “of a pet dog who is escaping a boring life to find out why there is no music left in Manchester.” End of the day, it is up to you to discern if this suits your taste or not. That said, we highly recommend both the band and their new single. (We’re also familiar with the phrase, “we told you so.”)

The Story of the “Change” Single:

Pip Sayers: “We started writing ‘Change’ about a year ago, and it started in the form of a loose structure and melody written by our lead singer Will. Whenever we start writing a song, we often play around with the feel and groove underneath it jamming it out until it either feels wrong and we change it, or it feels right and we keep it. For a while, the song was 4 minutes of hard-hitting disco (this happens with most of our songs), and then we decided to save that for the end of the track and construct something else to go before it. We settled on a triplet feel, with everyone’s parts grew around it into the single you can hear now on all reputable streaming services.

Whenever we have a vague structure and idea of what a song is we stop writing it and perform it live to test the water. We love to do gigs where we’re not sure what’s going to happen, we rarely write set lists and are happy to take risks to keep our performances fresh.  This approach has led to some hilariously sketchy performances, but it also makes anything that doesn’t work plain to see. With Change it was the large instrumental that wasn’t working. Originally this was performed as an unstructured sax solo but it never took off in the way we wanted it to. We added a little more harmonic structure and it helped, but when we got to the recording studio we still weren’t happy.

We spent four days recording our upcoming album and the instrumental of change was left until last, and we still had no plan. Many hours into the night and many drinks later we had written and recorded an entire folk tin-whistle solo – one day we’ll release it, for now, we’ll leave it to your imagination. What is on the record is a drunken sax orchestra doing its best Steely Dan impersonation. It’s all we were left with before we had to pack up the studio – we hope you like it.”