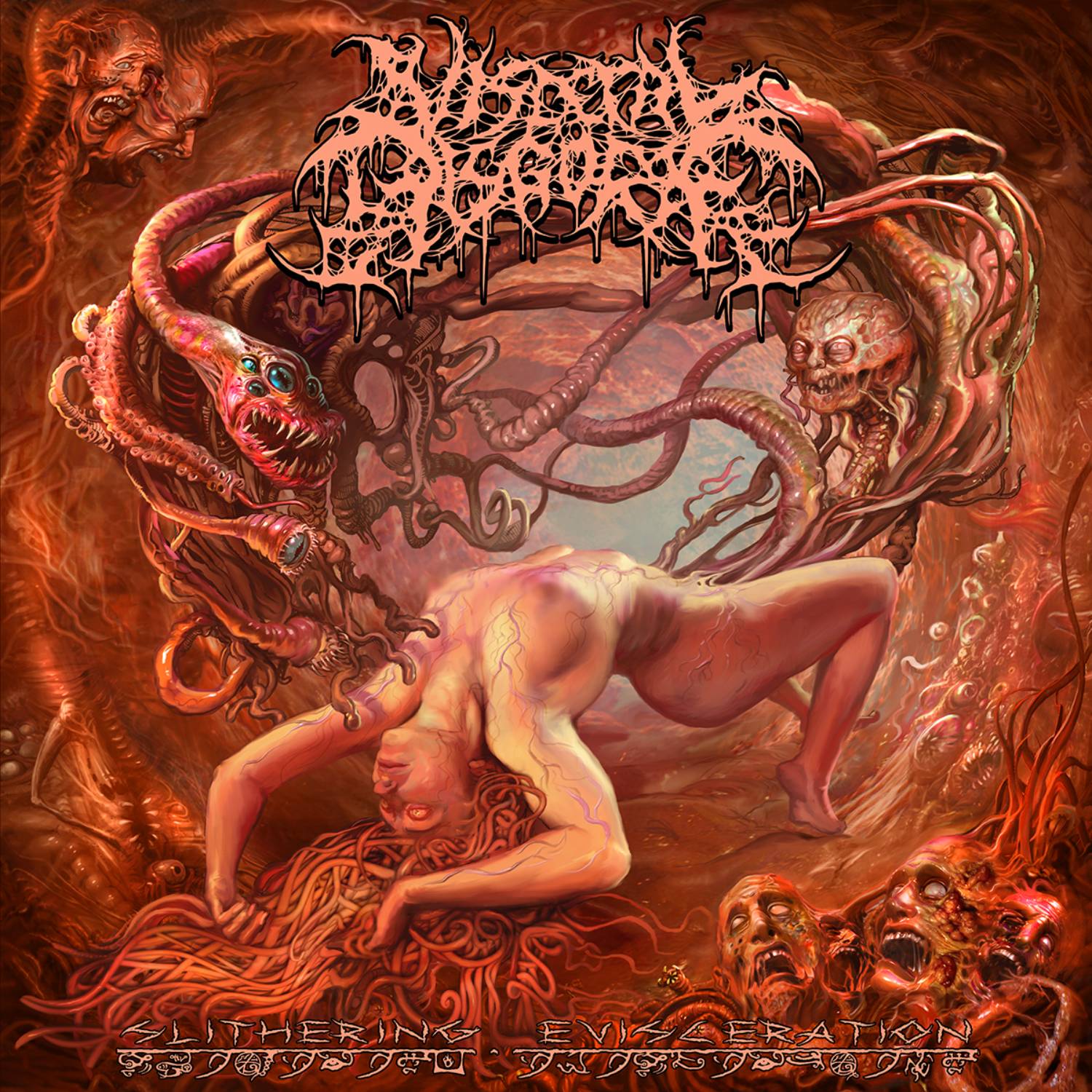 When Visceral Disgorge released their debut album Ingesting Putridity in 2011, the hype was definitely real: guttural vocals, slamming detuned riffs, blast beats and violent snare hits, murky production, and gore-drenched lyrics. It was everything brutal death metal fans required, without a doubt. And yet, even to this day, it’s never really resonated with me. Granted, all the pieces are in place and it is a mean bastard, but the songs are too long and unvaried for the intense style and I simply lose interest a few tracks in, switching over to Devourment or Abominable Putridity to get my slam needs met with dividends.

The band have overcome serious obstacles to finally record and release the follow-up (hence the eight-year gap between albums), including the devastating death of guitarist Steve Rosenzweig in 2014. With that in mind, I was keen to see how they had evolved and where they were headed with new material.

Firstly, the songs are thankfully shorter on Slithering Evisceration (pre-order a copy here), the album as a whole wrapping up around fifteen minutes shy of its predecessor. This allows for the guys to get in, destroy the room, and head off to the next song without overstaying their welcome. The vocals are still guttural and brutal, the guitars ripping hard with detuned intent, the bass audible and laying a dank bed of low-end, and the drums are goddamn fast and evil.

Check out the lyric video for “Necrotic Biogenesis” here:

The lyrical theme has swerved from the flesh-eating zombie gore of yore to a more cosmic, sci-fi focus, something that I’ve always enjoyed from the likes of Origin and Obscura, and it does add a different dimension to the overall atmosphere. The band are tighter than before and it definitely feels like they are aiming for a more technical (not progressive) attack as opposed to their previous slam groove.

With a move like that, the production needs to similarly be clean enough to be able to pick out the intricacies and highlight the playing, something that has not received enough focus here. The swampy production on the debut added to the ambience of the vileness, but here the vocals are too low, the guitars aren’t bright enough, and the snare lacks the punch it so desperately requires. That said, songs like “Necrotic Biogenesis,” “Architects Of Warping Flesh,” and “Absorbed By The Swarm” are lethal and take no prisoners, and the production can be overlooked when in the midst of this swarming mosh pit.

And here is the astounding drum playthrough of “Architects Of Warping Flesh” by drummer Billy Denne:

Ultimately, Slithering Evisceration is half an hour of whipping frenzy and furious savagery, snarling with hunger and a damn good time. If Visceral Disgorge uses this as a springboard for the next chapter of their career, taking into consideration the sound and vision and what that entails, we can look forward to a real treat in the future.