Sloan Voxx, head of Voxx Promos, is the mind and the spirit behind the creation of Decimate Metalfest, Western Canada’s newest and most exciting heavy metal festival. Occurring in Calgary, Alberta, Decimate is now in its second year and will take place July 5th and 6th at the Border Crossing Pub and July 7th at the Blind Beggar Pub. It will bring together an epic weekend of fun, family and passionate heavy metal, with over 25 bands set to take part in Decimate 2.0, as it is being called this year. If you’re in the Calgary area, or happen to be passing by, or you just really like metal, then make sure you purchase tickets right now!

Sloan Voxx and Voxx Promotions have become well-known in Western Canada for putting together some of the top metal festivals and previously acted as the head promoter for Canada’s Extreme Metal Radio’s CEMR Metalfest in 2017 which showcased a fantastic lineup of some of Western Canada’s finest, up-and-coming metal bands. We are incredibly pleased today to give the floor to Sloan Voxx for a special guest piece on some of her most anticipated female-led acts at this year’s festival.

To get ya’ll pumped for this year’s event, check out the Decimate 2.0 trailer:

Guest Blog with Sloan Voxx on Organizing Decimate 2.0:
– One of the many things our Western-Canadian community stands out for is our summer music festivals! These festivals take place throughout Alberta and BC and are definitely something we, as promoters and show-goers, look forward to every year. The anticipation of the lineup, the music previews leading up to the festivals, and finally, the main event itself! The versatility, the energy, the sense of unity and family all brought together through the many talented musicians who make this all possible! I’m thrilled for DEcimate 2.0 and even though it hasn’t even begun, I can’t wait to start working on the next!

01. Into Eternity
– Seeing Into Eternity with Amanda Kiernan at Calgary Metalfest a few years back is actually what inspired me to try to become a heavy metal vocalist. Something inside me awoke that night, triggered by her and the band, and has been a fire inside me ever since. Naturally, I’d want to have them on the festival bill and as luck would have it, they were more than interested in playing! I can’t believe I have the chance to work with these amazingly talented musicians!

Check out the Decimate feature I did for Into Eternity.

There’s a “Sandstorm” coming and it’s courtesy of Into Eternity. Check out this recently released lyric video:

02. KOSM
– I first saw this band live at Metalockalypstick Fest last June and boy was I ever impressed. The amount of talent that came blaring out of this band was untouchable that night. They absolutely slayed it. Jessie crushes both clean and what I call “dirty vocals” so hard! She also makes it look effortless, as does the rest of her band on all counts. The album Cosmonaut is insanely good, the music videos are on point and they are just the humblest of people. I just had to have them on Decimate. It’s also their first time playing Calgary which is a full-on bonus!

Check out the Decimate feature I did for KOSM.

03. Ophelia Falling
– I first saw this band at Metalocalypstick Fest in the summer of 2018. Not only was their live performance mesmerizing, but there was one key moment of their performance that has never left my mind. There came a song, “Whisper (Berceuse),” and within that song, was sung one of the clearest and crisp high C’s I’ve ever heard (never mind it was live)! A most beautiful moment where genuine tears flowed from my eyes. I know I wasn’t the only one in the room who felt that and if not… I’m completely okay that I was able to experience that kind of emotion from a song and needed this band to be a part of Decimate. Be sure to come and witness this for yourself.

Check out the Decimate feature I did for Ophelia Falling.

Watch this live video of Ophelia Falling performing at Pub 340:

04. Greybeard
– I first witnessed Greybeard’s performance at last year’s Loud As Hell Festival in Drumheller, Alberta and it was nothing short of enrapturing. Their music encompasses so many various forms and dialects, it really keeps you on your toes! You can tell this band thoroughly feels their music. A performance that was truly a pleasure to experience. We thought they would be a great addition to this year’s festival!

Check out the Decimate feature I did for Greybeard.

05. Syryn
– Well, this is my baby, and there are two women involved! Yeah, I guess I’m the promoter who put their own band on the fest roster. It’s not the first time, but what can I say, we just love to play!! Syryn started as a pipe dream for me after my Into Eternity epiphany. As a single mother with a young child, it took me quite a while to get off the ground. However, when I did finally put my plan into action, we hit the ground running. We’ve been playing for nearly exactly a year and have had so many great opportunities including competing in the Wacken Metal Battle Canada, and making it into the final! What an amazing ride it’s been! We’ve got an album set to drop in the summer and I can’t wait to see what kind of feedback we get for it!

Check out the Decimate feature I did for Syryn.

06. Hazzardous Materials
– What can I say about these girls? I admire them. Plain and simple. The amount of courage and confidence it takes to get up there and do what they do is just beyond me. Not to mention the number of hours it takes to create and practice these routines. I’ve seen many of the dance numbers from these ladies, and it is truly a sight to behold. They pour their heart, soul, blood, sweat, and tears into what they do and it shows! How could I not want to include them in the roster?!

Check out the Decimate features I did for the three dancers, Hazzard, Persephone Bleeds and Addy Autopcy.

07. School of Rock Calgary South Performance Band (-18)
– When I first heard about this school, I was really excited to learn about everything they have to offer. From lessons to camps to the opportunity for the kids to experience what a real live performance is like! They get to play stages I could only dream of paying! These are young, growing musicians and are the musical minds of the next generation and future! I haven’t seen this band play live yet, but I’m simply ecstatic to be able to have them join us at Decimate this year and can’t wait to see what’s to come from them all moving forward! I also can’t wait to get a pit started for them! The added all-ages element of this year’s festival is very exciting for me. I’m hoping we can have this component for years to come, and at one point be able to make the entire festival open to people of all ages!

Check out the Decimate feature I did for the School of Rock.

And before you head off, here’s the event’s official poster/flyer: 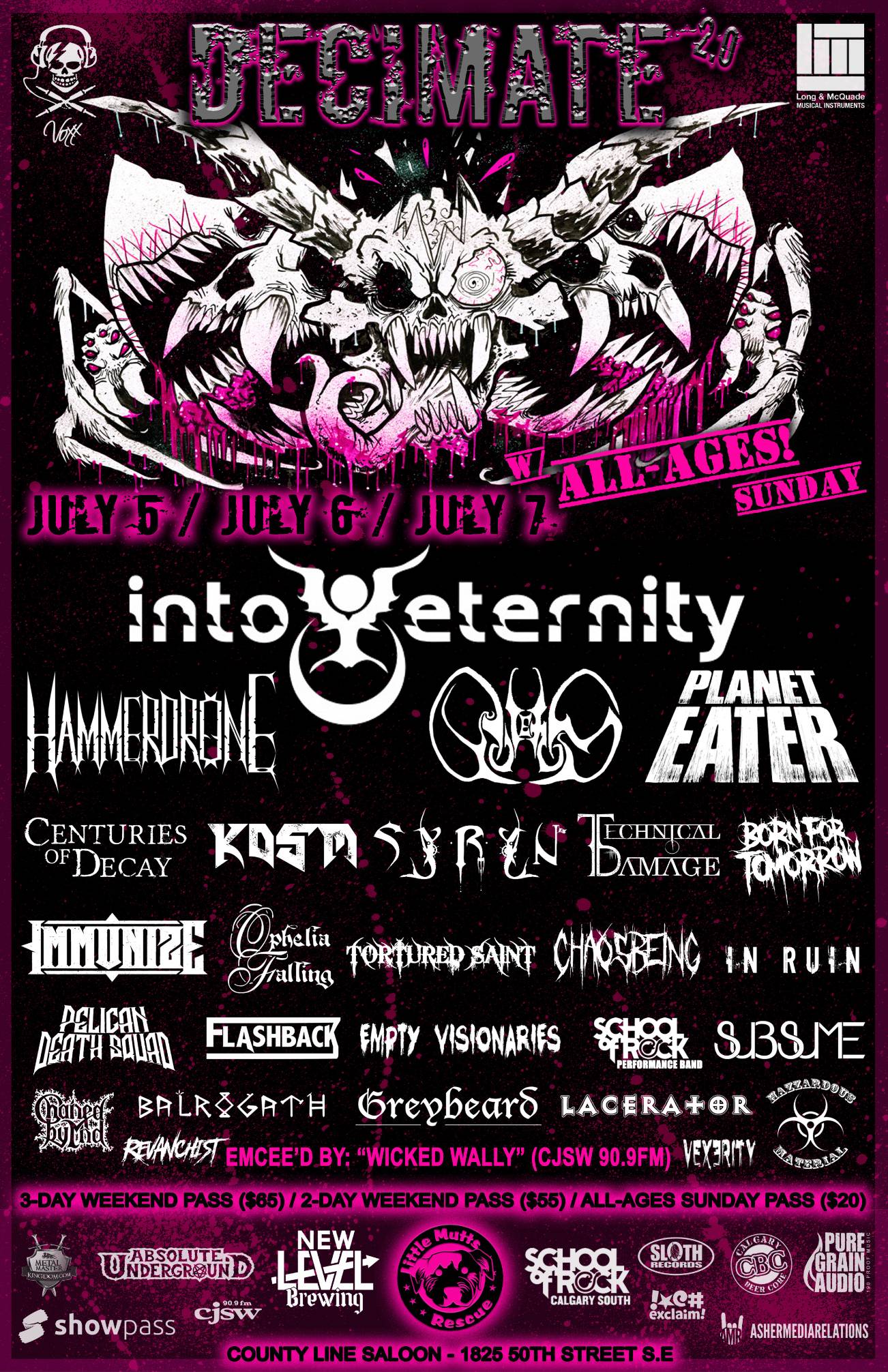