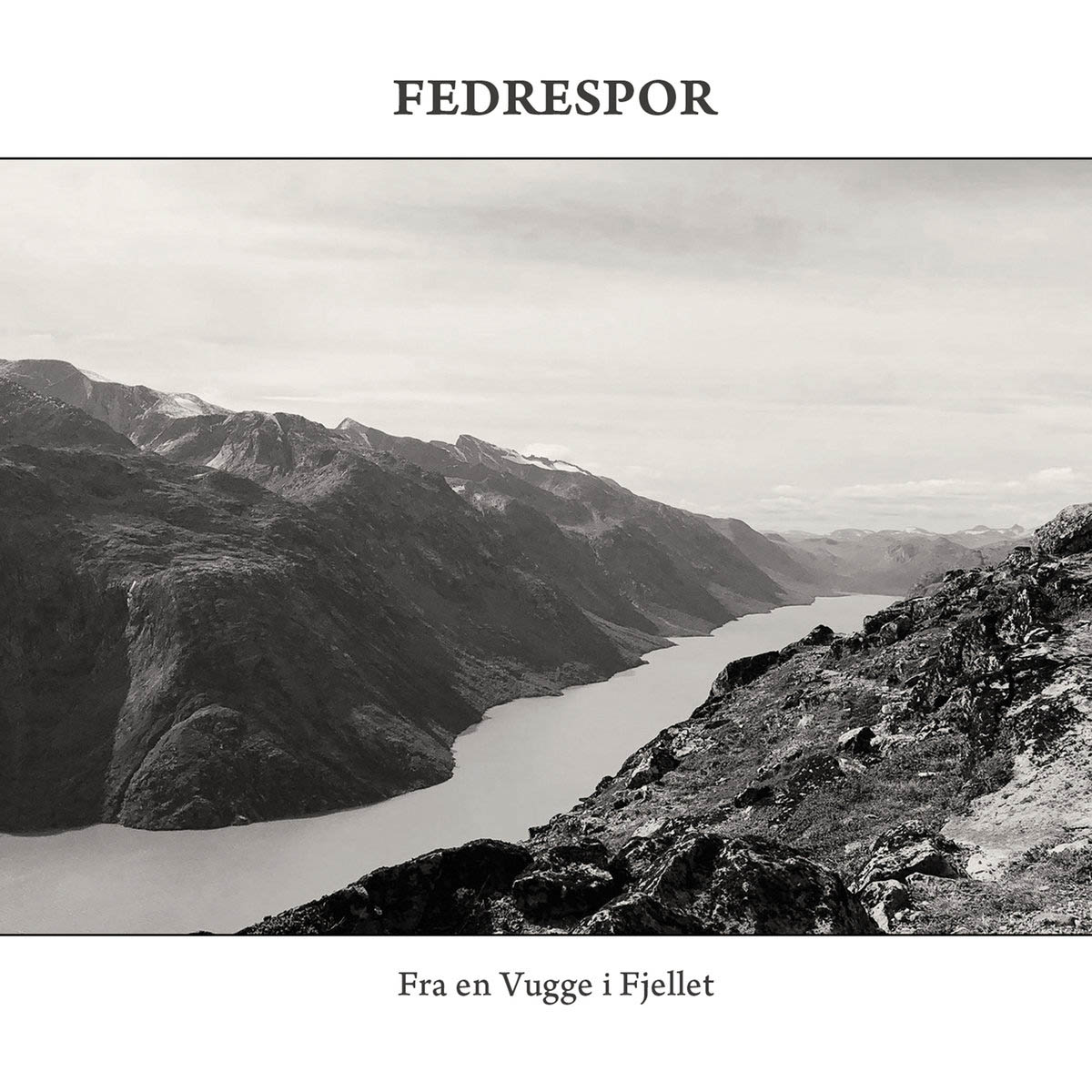 Born from the industrial scene of the ‘80s and ‘90s, neofolk has evolved via a wide range of artists into an introspective genre, often focused on the inner self and how we relate to the natural world around us. At least, that’s what Varg Torden Saastad, the artist behind Fedrespor, does. His music conjures musical landscapes that are as intensely personal as they are universally accessible. Such is the case on his second album Fra en Vugge I Fjellet. It is both an intensely personal album, yet expresses feelings that are felt universally.

While his first album, Tid, was an intensely melancholic listen, suffused with the grief Saastad was undergoing at the time, Fra en Vugge I Fjellet is by turns more hopeful and filled with life – if still quite melancholic. The title means “from a cradle in the mountains” which, with the black-and-white photo of Nordic scenery on the album cover, instantly evokes the idea of Saastad sitting in a cabin above a fjord, thinking, reflecting, and composing.

Certainly the music proceeds at a relatively pensive tempo. The droning strings and vocals of intro “Dom” (‘Judgment’) give way to the title track. Through an almost droning repetition, the bowed strings play their motif over a slow but insistent drum in a ritualistic manner while the vocal lines and plucked strings create the melody. It is melancholic and somewhat dissonant, with occasional flashes of more peaceful harmony. This cradle of nature is not a comforting one: the music evokes the kind of closeness with nature’s old gods of which a band like Eluveitie could only dream.

Most of the album proceeds like this. At times, it feels as if Saastad relies a little too much on the drone and repetitions, this provides a solid grounding for the melodies to wander where they will, and the imagery evoked wouldn’t work quite so well without it. For example, “Du I Mon Drøm” (You In My Dream) is an entirely instrumental track which, again, exhibits a melancholic bowed-string motif repeated under an acoustic guitar reminiscent of Ulvesang. Softly-played horns and flutes provide wistful atmospherics, conjuring an oneiric landscape housing restless dreamers and their unpleasant dreams. It’s not a nightmare – there aren’t any dramatic flourishes to conjure fear – but it is not a pleasant dream from which the sleeper might wake feeling refreshed. Perhaps Saastad was dreaming of his sibling, whose death inspired Tid. Perhaps it was simply a bad dream, rendered into music.

Starting with the album’s title track, “Fra en Vugge i Fjellet,” you may stream the full beast here.

It would certainly not be unreasonable to suggest that the trauma that inspired Tid might have served as an inspiration here. A cradle is where a new-born sleeps, and after a traumatic event, people often want to get away from it all. Thus we have an album that, musically, represents a retreat and return to and from the mountains. This explains the intensely mournful melodies, droning motifs, and intimate atmospheres on the album. But it isn’t all doom and gloom – those flashes of harmonious peace in the title track, the increased tempo on “Vekst” (‘Growth’) both point to a man beginning to shed the emotional weight of grief.

This would certainly explain what seems to be a complete step-change in the penultimate track. It changes from the contemplative neofolk to a tune that sounds closer to Ulvesang by way of Rodrigo y Gabriela. All the energy of the Mexican duo is on display, though the song retains the atmospheric neofolk of the former group. Its title translates to ‘Longing for Dawn.’ Dawn is the beginning of a new day, and in that vein, the song evokes images of hopefulness, with the grey clouds of grief receding before the sunlight. The hopeful melody in album closer “Stien” (‘Path’) would certainly seem to confer this: the path before him now is a brighter one, full of hope.

If this album is a musical allegory of the artist shedding his grief in favour of personal growth and a more hopeful future, we may experience a more joyful collection of songs on future recordings. But for now, Fra en Vugge i Fjellet is just as mournful as its predecessor. It’s a well-constructed musical evocation of grief and its associated emotions, though it leans a tad too heavily on the drone and repetitions in places.