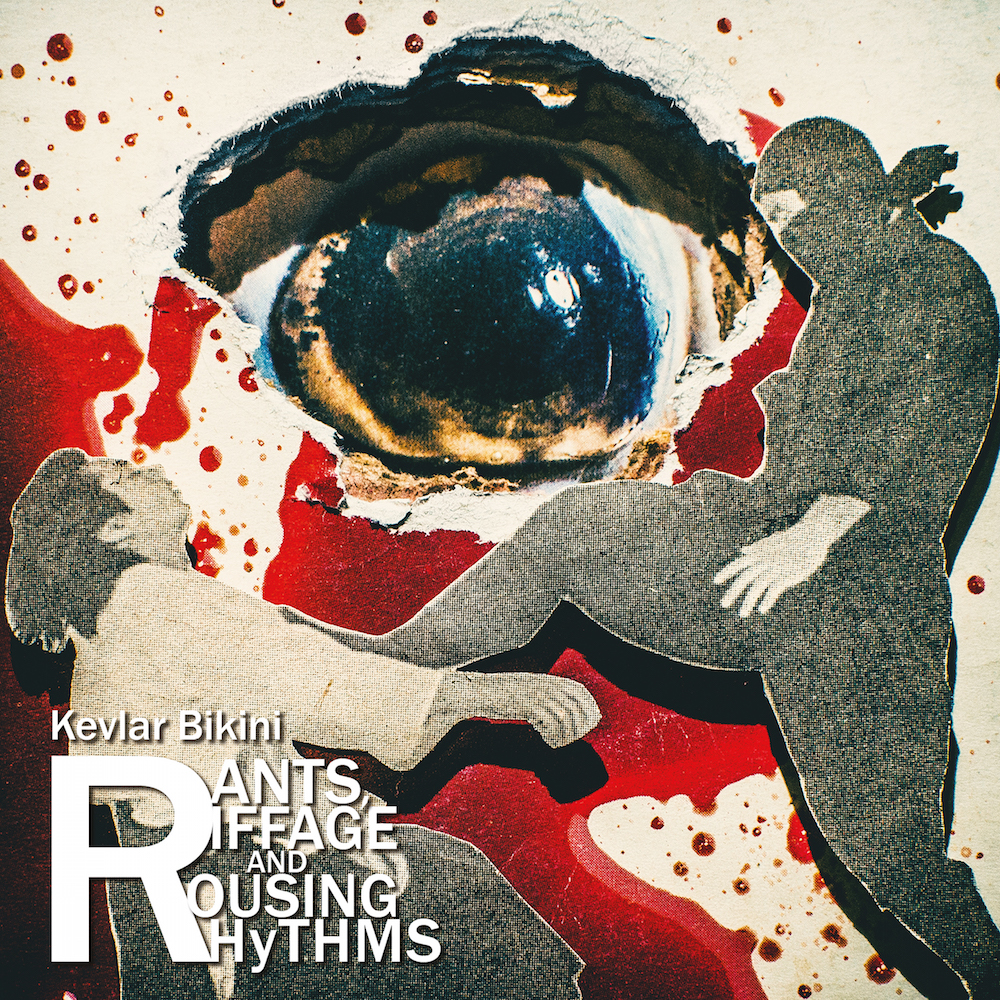 When a band’s name is Kevlar Bikini, it’s a fair assumption that the music will be far from po-faced and solemn. For their first two albums, that was the case – a riotous mélange of metal, punk and rock n’ roll that embodied party music. Leading the circus was Matija Auker, whose outrageous lyrics and vocal presence left an indelible mark. Since his abrupt departure from the band, Kevlar Bikini have undergone a transformation; Rants, Riffage, and Rousing Rhythms represents a new era that is intriguing for a number of reasons.

While the instrumental side was already fairly interesting to begin with – Kevlar Bikini must have eclectic influences – their style on Rants… is even more multi-faceted. Swinging Southern-style groove collides with street-punk for much of the record, while “Meatbomb” has a fun skank deeply embedded, and “Nailbiter Blues” flirts with grind-punk freneticism. The last 45 seconds of the album even has a guy (Vanja Ileković, guest) going apeshit on a saxophone, because why not? As per usual, the record is mixed marvellously, highlighting the evident chemistry between Mario Berta’s guitar lines, Siniša Arlavi’s bass work, and Vedran Ernjakovic’s drumming. All three are locked in step, even when the music is careering all over the place, and they produce some fun and enjoyable moments.

The bigger change – of course – is in the vocals. After a presumably fruitless search for a replacement, Mario Berta took up the mantle himself. Unfortunately, his hoarse monotone shouts jar strongly against the fun-loving music going on around it. The charisma and vocal variety that dripped from Explodisiac and Hi Fi Or Die is sorely missed here. As if this weren’t enough, the lyrics are fairly directionless and lack punch – the repetition of “Feed me to my enemies” on “Meatbomb” is the closest to a laugh-out-loud line on the record, while “Rabies Road” and “Not Your Night” fly by without much comment. There’s even a couplet that, if interpreted in a certain way, can appear as a tasteless potshot at their ex-vocalist’s departure. [1] For a band whose strength lay in memorability and merriment, the words here fail to match the music’s fun-loving party mood.

You tell us… Does this song give you the “Nailbiter Blues”?

Many groups bounce back from losing a key member, but Kevlar Bikini has stumbled. Those new to the band may well get onboard and find many merits to Rants… – it has a lot going for it. On the other hand, this new direction has lost a lot of what the crew had built their name on, while the one-trick vocals and killjoy lyrics sour what could have been a promising turnaround.