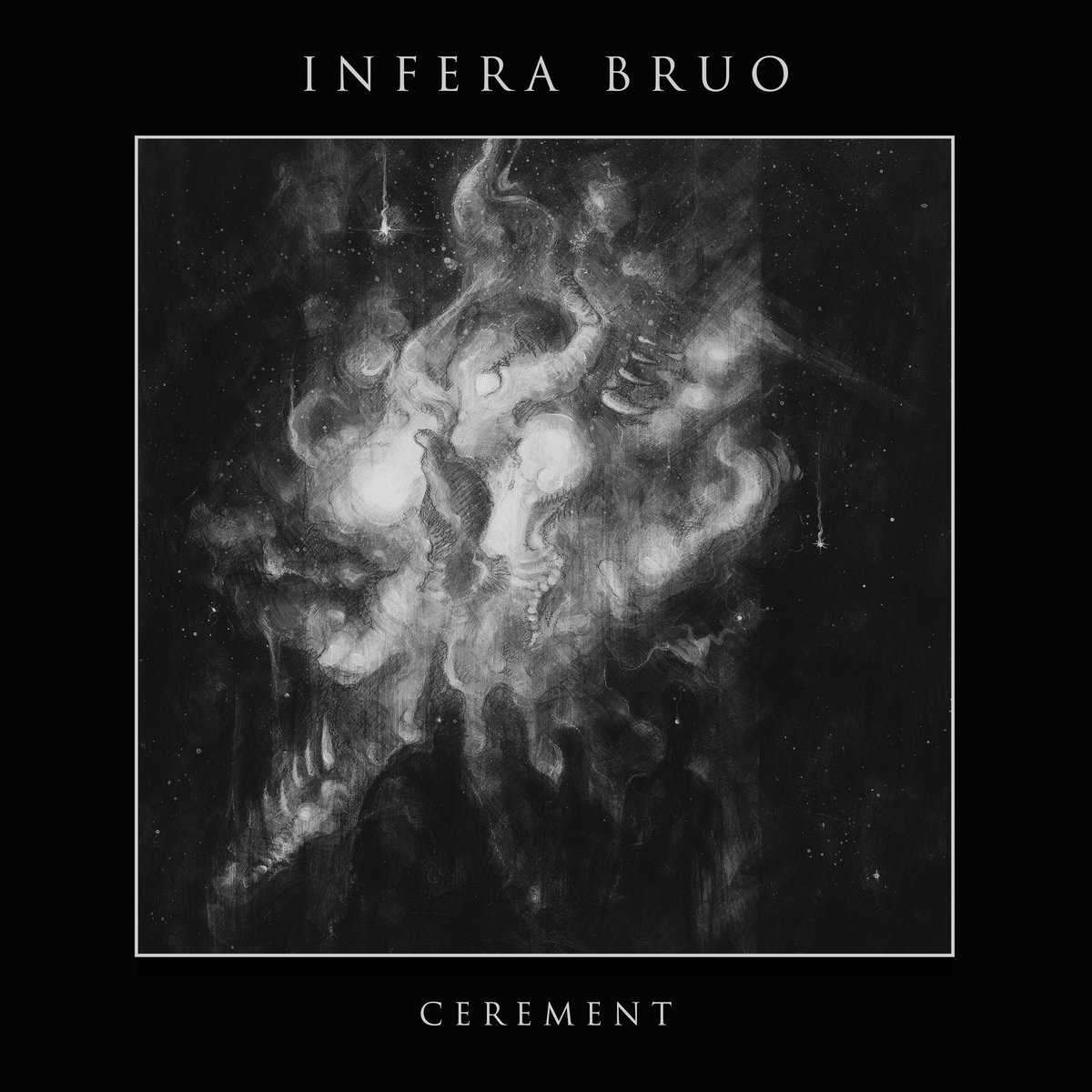 “Progressive” is a term used to describe many bands, but few actively pursue the art of progression, evolving their style beyond the basic tools that make up a chosen genre. Infera Bruo, however, bridge that gap between records, consistently pushing to evolve their sound. Theirs is an extreme style of metal – the group take their name from the Esperanto for “hellish noise” – but their latest record, Cerement, [1] exceeds such a predictable moniker.

Infera Bruo are comprised of former members of bands such as Trap Them, Cul De Sac, and Pillory – three vastly different styles encompassed in one group. It is remarkable, then, that they have distilled such varying influences into a black metal template so smoothly over three albums. Looking back at their catalogue, Infera Bruo has truly experimented with their approach without going so far as to dramatically alter their vision and musical scope with any particular release. 2013’s Desolate Unknown was a dark affair, full of cavernous ambient sections interspaced with frenetic, buzzing tremolo. 2015 saw In Conjuration emerge, with a shift in riffing to catchy melodies and intense shredding.

Unveil the “Shroud Enigma” below…

Now, on Cerement we see further nuances emerge in the songwriting, as the atmosphere develops and the songs are finally allowed to breathe. Without a doubt, the riffs make up the best parts of the record. Oftentimes extraordinary on the proper metal tracks, the riffs and melodies from ex-Trap Them guitarist Galen, are at once wonderfully complex yet catchy. One such hook stands out on second track “Shroud Enigma”, which is unfortunately sandwiched by lacklustre ambient acoustic passages. Placing an interlude after such a potent opening song causes the band to lose the momentum that “Shroud Enigma” builds up – a flaw which is repeated as the album draws to a close on “Temporial”, which lacks enough dramatic effects to close out the record in a more resounding fashion.

While “Shroud Enigma” is one of the more straightforward tracks on Cerement, Infera Bruo’s experimental and progressive nature really emerges on “Draped In Sky”; the riffing starts off in an atypical doom-laden fashion, accentuated by guitar noise, before dropping in a rather inconspicuous injection of stoner rock into the mix. The fuzzy guitar playing slow, crushing riffs provides an effective counterbalance to the screamed vocals, as well as laying down solid guitar solos.

Like a good wine, you should always enjoy the “Endnotes”.

Front and centre in all of this, vocalist/bassist Neutrino gives a commanding series of shrieks befitting a black metal band. For better or worse, he has used the same approach since the beginning, and while effective enough, some listeners might crave for a more dynamic, effusive vocal delivery. Where the dynamics emerge are in the chants and clean background vocals, which provide consistently good accentuation to the atmosphere. Such is the case on “Endnotes” and “Lunar Pass”, where the band incorporate clean vocals and chants to good effect, timing each instance of clean singing and chanting perfectly so as not to sound shoed-in.

Where Neutrino excels is in his bass playing; his work weaves effortlessly around guitar melodies and main riffs throughout the record. Bass lines don’t have to constantly stay locked on drum patterns to remain effective. Neutrino is underrated regarding his instrument, even delving into virtuoso territory. Conversely, drummer Ardroth often stays focused on driving the rhythm section. Ardroth concentrates on precision drumming and setting up transitions between phrases rather than performing audacious fills, which is either a pro or a con according to preference but executed neatly nonetheless.

In closing, Cerement is a wonderfully distinctive album, bound to pique the interest of many into boundary-pushing extreme metal. Despite some faults, Infera Bruo retains progressive leanings while avoiding the self-derivative trappings of blast beat-heavy black metal. Instead, Cerement is well-written, well-executed, and deservedly belongs in the band’s stellar discography. With this trajectory, Infera Bruo will no doubt create more albums of a quality that will give their peers stiff competition. Here’s to hoping that they do.

Leading off with “Scorne”, stream the entire album here.

1. The title refers to wax cloth wrappings that were once used for corpses. It’s referenced in Shakespearean passages such as Hamlet: “Why thy canonized bones, hearsed in death, have burst their cerements.”