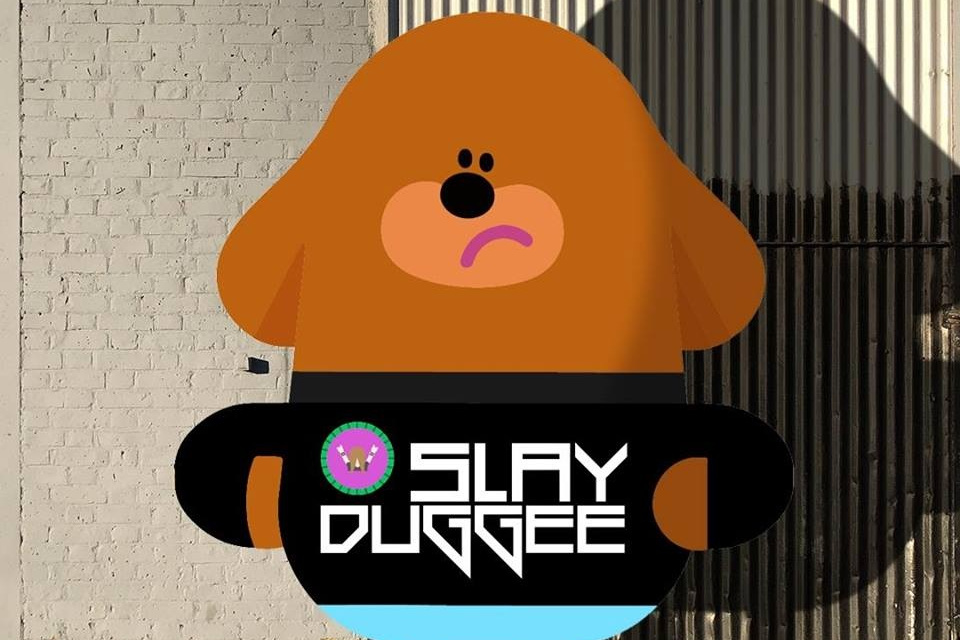 In Conversation with SLAY DUGGEE: “Kids Can handle Pure Metal and They Love It”

Heavy metal and kids. The perceived incongruity has spawned a thousand cute memes and YouTube videos; there are whole websites dedicated to selling metal-themed baby clothes and bibs, CDs with lullaby versions of Metallica tracks. In Finland (where else?) there’s a dinosaur-themed metal band called Hevisaurus that has released seven albums, specially made for children, and even has its own movie.

At first glance, Slay Duggee would appear to be a novelty act in the same vein. Formed on a whim after an Instagram comment in February 2018, these UK metal dads/dogs released a cover of the song “Stick” from the CBBC show Hey Duggee, which quickly reached over half a million YouTube hits, leading to Radio 6’s Steve Lamacq dubbing them “The Lords Of Toddler Metal.” They now have a full-length album on the way, and a plan to get themselves onto the lineup for next year’s Download Festival.

To be fair, Slay Duggee would probably agree with the term novelty, in a genre of music that lends itself so well to parody and humour. But I would venture to say that they are more than a novelty act, for two reasons. Firstly, because they respect children’s listening sophistication, believing firmly that kids can appreciate metal without it being tamed, tempered or softened. And secondly, because their project brings up a host of interesting issues: what happens when metalheads have kids; how listening tastes develop with age; how music festivals and gigs can better cater for families. As a metal parent myself, these issues hit pretty close to home, so it was a no-brainer to chat with Slay Duggee about whether metal can truly be for everyone.

For a sample of what Slay Duggee is all about, check out their cover of Pink Floyd’s “Baby Shark.”

The band plays in full dog costume/character and are not about to reveal their true identities any time soon. “We are Ricky Bow-Wow, Black Shuck, Teddy Wall-Street, sometimes Biscuits, sometimes Droopy. Just a bunch of multi-instrumentalist metal dogs having fun.” Unsurprisingly, they were all metal fans and musicians before Slay Duggee. Says Ricky Bow-Wow; “I’m a punk at heart. Rise Against, Hot Water Music are two of my faves. The guy from Eat Dirt has an amazing voice as well… they’re gonna go far.” Black Shuck commented, “I loved hardcore ever since skate videos put me onto Bad Brains in the ‘90s. Now I’m listening to King Parrot, Power Trip, Iron Reagan. You heard M$rder yet?!” Meanwhile Teddy Wall-Street said that he “discovered the fun of metal listening to Lawnmower Deth. I guess their ‘Kids in America’ sowed a seed in doing metal covers of non-metal songs. Kev’s band Acid Reign got me into more technical metal.”

So what has the reaction been so far to toddler metal? The highly respected Steve Sears (Rolo Tomassi, Palm Reader and many others) is currently mixing their album, which suggests a positive response from the metal community. “In reality, all the parents we’ve met within metal are behind us, I think…and Steve Sears has been responsible for some of the greatest heavy music ever: ‘Orchestra of Wolves’ by Gallows, ‘Groovehammer’ by The Hell and now Slay Duggee. The album is HEAVY, and way beyond anything we’d ever hoped for…We’ve also been very lucky to work with James Monteith (Tesseract), and Scorpion from Nekrogoblikon. The dream would, of course, be Ozzy, Meatloaf or Graf Holzfeuer (ArnoCorps). Maybe that would silence our critics.”

And critics no doubt there will be. Despite these impressive collaborations and the positive response from metal parents, there are the metal elitists who won’t take kindly to any hint of piss-taking, or indeed, to the idea of opening up the subculture to outsiders.

“I think counter cultures are often bastardized by the mainstream, so it’s understandable we’d want to keep our little sub-culture a secret… We get these comments like ‘This is officially the end of metal’ and all that. People worry that popularization of an art and its culture will dilute it, and make it lose its integrity. If you want to keep it going, do something about it, form a band, promote a band, start a metal night, go to the gigs and buy the music and the merch of the guys that are properly living it.”

It goes without saying that these guys don’t take themselves seriously. But they are serious about getting kids into metal. They don’t believe that kids need to be broken in gently with lullaby versions of Metallica songs, and they absolutely do not tone down the heaviness of their playing. There’s no question of clean vocals; they go straight for the extreme end of metal sounds so that Slay Duggee is all about down-tuned, thrashy riffs and blast beats.

Black Shuck elaborates; “We are all born with a natural instinct to enjoy shouting and jumping around. If your kids say they don’t like it, they are probably just pretending because they think it’s not cool. But you can pass things on to your kids before they become ‘Beliebers.’ The great metal bands of the future are being formed by the music they listen to right now. Getting kids listening to heavy music really young means we’ll probably get more heavy music in the future. That’s good for us all, right?”

“Everything Is Awesome” with Slay Duggee’s Lego video version of Tegan and Sara’s track from The Lego Movie.

It would be fascinating to know what musicologists think about this when you consider that even adults who get into heavy metal tend to start off with the likes of Iron Maiden and gradually build up to more extreme subgenres. But I’m inclined to agree with Slay Duggee. I’ve tried to introduce my four kids to metal by playing it in the car on the way to school, and by taking them to my own gigs. I’ve only succeeded with two of them; my eight-year-old son loves Heaven Shall Burn, After The Burial, and pretty much anything deathcore, while my four-year-old daughter likes Parkway Drive. But the other two have not shown any appreciation at all. Metal is not for everyone, but for the children who do have a taste for it (as long as they’re protected from the more unsuitable lyrics and album art of course), there’s no reason to wait. Particularly if you want to become a musician yourself; metal is so technical that in order to become proficient, the younger you start taking lessons, the better. At the music academy where I play guitar, there’s a programme called “Metal4Kidz” and those eleven-year-olds play at a higher level than I could ever hope to achieve. Black Shuck agrees; “Imagine how amazing the metal will sound that these kids are going to make. My friend’s 17-year-old daughter Maya plays a note-perfect (version of) Tool’s ‘Schism.’ We’re not worthy! Let’s get Metal4Kidz to open for Slay Duggee.”

But one of the challenges they face is where to perform live. Since they are aiming at children, many of the usual metal venues pose problems when children are not allowed or it is late at night. Slay Duggee have plenty of creative solutions, including play centers and theme parks. “We want to do all the festivals and all the gigs. We’ll work something out to make sure the gig is done before bedtime. I think it does kids good to get a little feral in a safe environment for a short period of time. Isn’t that what adults get out of mosh pits?”

Festivals are the obvious answer, and Slay Duggee’s biggest goal, once their album is released, is to secure a place on the lineup at Download 2019. But metal festivals aren’t always easy for kids. Some are getting better at providing for families (for example, Resurrection Fest has a creche, Full Metal Holiday is designed for families), and I have seen children having the time of their lives at gigs; sitting on their parents’ shoulders for the best view, enjoying the thrill of live music, with ears protected.

You can’t go wrong with something as simply-awesome as the “Stick Song”.

But big festivals can inevitably become pretty hostile environments for children. I go to Hellfest every year, and wouldn’t dream of taking my kids until they’re much older. Blazing heat and dust, gross toilets, long queues for food and water, standing for hours; this year I saw two little boys being crowd-surfed over my head to the front of a particularly crushed arena, and both were in floods of tears. Where were their parents?! Metal crowds can be very physical – that’s the point. So what do Slay Duggee think festivals can do to help families?

“People are putting on events like FUN DMC (hip-hop) and Raver Tots (rave) with big-name DJs and live acts, so we should start a kids metal nights really (by ‘we’ I mean someone else because we’re too busy!) All festivals should really be safe for kids before sundown. After that…let’s all sacrifice goats and dance naked covered in their blood.”

Finally, to the most important question of all: Slay Duggee, do your kids like metal?

Ricky Bow-Wow: “My daughter tolerates it. She loves it when I play ‘Stacey’s Mom’ on guitar. Oh and our version of ‘Baby Shark.’ She loves a mosh.”

Black Shuck: “My kids always demand Eagles Of Death Metal in the car, which is a start. They also love Slay Duggee.”

Teddy Wall-Street: “Ernest is six and his favourite band is Evil Scarecrow, and Lemmy is two, he’ll jump around to anything.”

If you’d like to contribute to the band and their recording, you can with Kickstarter at this link.