Formed over 15 years ago in Oklahoma, Hinder first hit it big with 2005’s triple-platinum Extreme Behavior, a Universal Records title. Extreme Behavior would hit #6 on the Billboard 200 and #1 on Australia’s ARIA Album Chart on the strength of singles like “Lips Of An Angel,” “Get Stoned” and “Better Than Me.” The first single from Hinder’s second album Take It To The Limit, “Use Me,” also charted high and Limit went gold in the States. The band’s following two efforts for Republic/Universal also charted before Hinder went indie with 2015’s When The Smoke Clears.

As released last year, The Reign is Hinder’s sixth full-length studio album and its second overall for The End Records. Self-produced by vocalist Marshal Dutton and drummer Cody Hanson, sessions for The Reign began in 2016. Prior to The Reign hitting stores, two singles were released — “Remember Me” was premiered via Loudwire back in April — and touring was done alongside Nonpoint.

On behalf of PureGrainAudio, I had the pleasure of speaking with the aforementioned Hanson. According to Hanson, Hinder — which also includes lead guitarist Joe “Blower” Garvey, rhythm guitarist Mark King and bassist Mike Rodden — has plenty of touring ahead. Hanson, as a partner in Back-Lounge Productions, also has his fair share of production productions to work on.

Here is the song “The Reign” by Hinder.

What led Hinder to self-produce The Reign?
Cody Hanson: This is actually the fifth Hinder release — fourth full-length album — that Marshal and I have produced. We have a great studio space in Oklahoma City where we work with other bands and artists. Since we have been working together for so long, we have a really efficient process. Plus, we can take our time and focus on making the best album that we can make without having to worry about timelines or big studio budgets.

Did the band have a deal with The End Records before making the album?
Hanson: Yes. We signed with The End before our last album, When The Smoke Clears. We’ve really enjoyed working with their team.

Around how many songs did you write for The Reign?
Hanson: We wrote over 20 songs for this album. It was almost like we recorded two different albums. Almost half of the songs had more of an “alt” feel to them. At the end of the day, we decided to go with the grittier rock sound.

What is your favorite song on The Reign?
Hanson: I don’t really have a stand-out favorite. My top three would be “Loser’s Salute,” “Drink You Away” and “The Reign.”

The covert artwork for the band’s latest album The Reign. 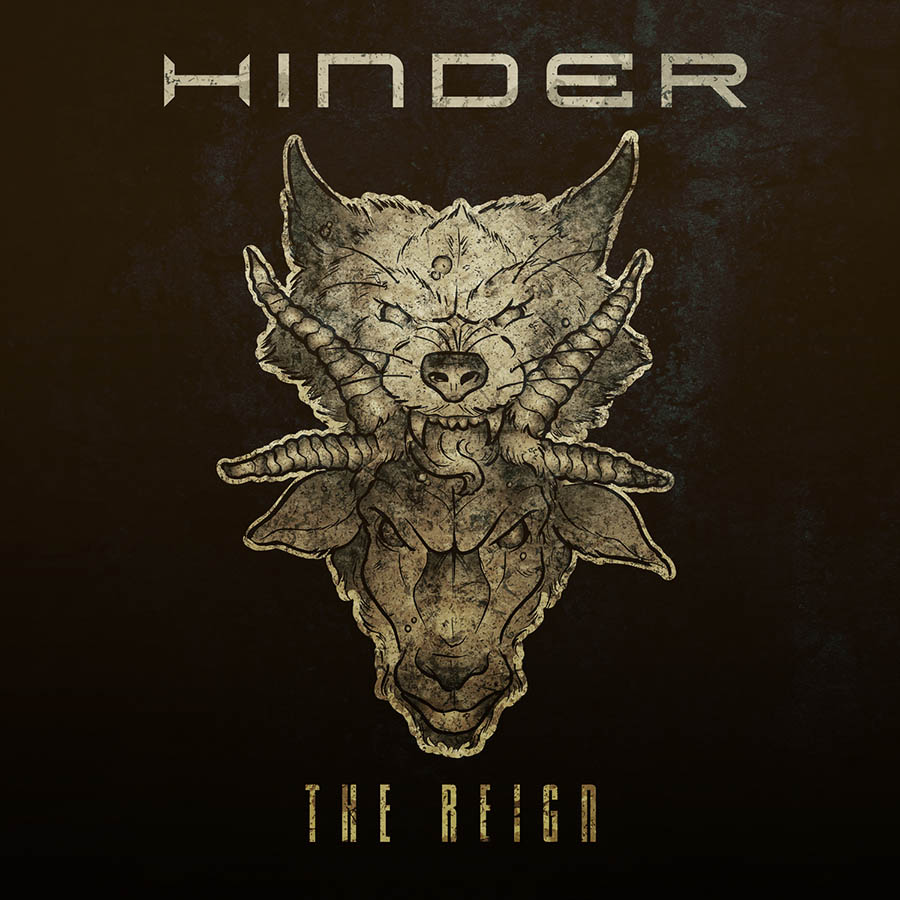 Do you play any instruments besides drums? Do you do all of your writing on guitar?
Hanson: I play guitar and a little bit of piano. I wouldn’t say that I’m good at either. But you have to be able to play one or the other to write songs. As far as writing goes, I would say most of it is done with an acoustic guitar. However, we bounce back and forth to the piano quite a bit.

What inspired you to play drums for the first time? Was it a particular album or player?
Hanson: I wouldn’t say it was anyone in particular. I just remember going to see bands with my parents when I was younger and I was always fixated on the drummer. Even today, when I go to a show I try to watch the band in its entirety but for some reason, my eyes always end up being glued to the drums. After all this time it’s still a fascinating instrument.

At what point did it become clear that Hinder was going to be a career and not just a hobby for you?
Hanson: Honestly, it was after the very first practice. I really wasn’t looking to be in a band but something just clicked. My wife always jokes around with me that I can’t have any hobbies because I always want to turn them into businesses. I think she might be right.

From Mötley Crüe to Nickelback to Buckcherry, Hinder has been part of a lot of big rock tours. Do you look at any particular tour most fondly?
Hanson: The Nickelback guys always treated us very well out on the road. We’ve had a lot of amazing tours and made a ton of friends through the years. However, the tour that always stands out in my mind was our first headlining arena/shed tour. It was the called the Bad Boys Of Rock tour. It was Hinder, Papa Roach, Buckcherry, The Exies and Rev Theory. We drank way too much and had too much fun.

Check out the band’s single “Dead To Me (When The Smoke Clears)” right here.

Is touring still as fun for you these days as it was a decade ago?
Hanson: Touring is very different from the way it was 10 years ago. Don’t get me wrong, we still party too much and have a great time, but we don’t wake up at 6:30 AM and drink an entire bottle of warm tequila like we used to. I don’t think we could hang with the 23-year old versions of ourselves. We definitely still do love what we do. Going out on the road and playing for our fans will never get old.

When not busy with music, how do you like to spend your free time?
Hanson: There really isn’t much time away from music. When we’re not on the road or working on Hinder material, we’re in the studio writing or working on other projects.

The Reign aside, what was your favorite new album of 2017?
Hanson: To be honest, I really haven’t had a chance to listen to a ton of new music this year. We’ve been super-busy finishing the album as well as working on some other projects. I will say that I have really enjoyed what I’ve heard from Highly Suspect. They’re bringing a fresh attitude to rock that I really like. Also, I really like what I’ve heard from the new Papa Roach album. I know they worked with Colin Britain and that guy is really talented.

Finally, Cody, any last words for the kids?
Hanson: Thanks to everyone that stuck around and supported Hinder all these years. Our fans truly mean the world to us. Also, GO GET THE REIGN!

Here is the lyric video for the single “Intoxicated”.