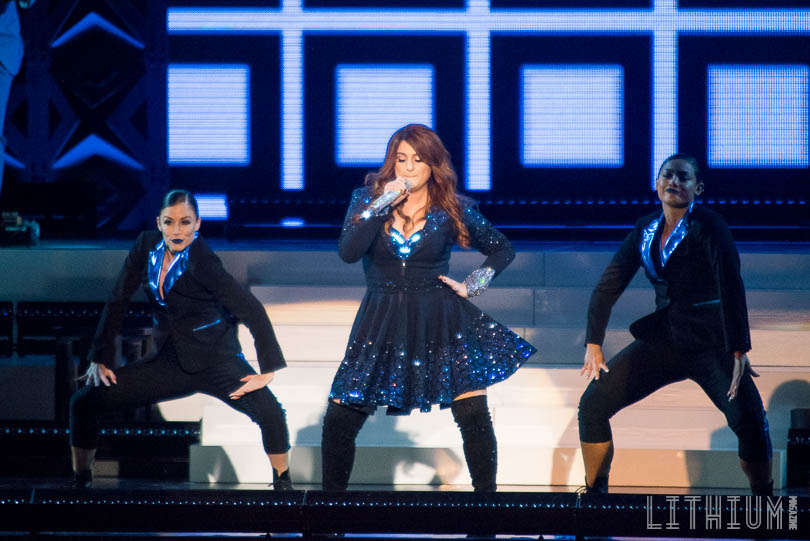 After taking a two and a half week break from touring, Meghan Trainor returned for the second leg this past Tuesday night in Toronto. Before attending The Untouchable Tour, I haven’t heard too many people talking about it. I, personally, have never seen or read an article from any news outlet that spoke of how fantastic the show was.

Well, if this is also the case with you, then let me be the first to tell you that it was indeed fantastic.

First off, Trainor’s openers – Common Kings and Hailee Steinfeld – were highly energetic and definitely set the scene for Trainor. Steinfeld got the crowd screaming and singing when she covered Justin Bieber’s “Love Yourself.” Trainor and her team made a good choice to bring out these two acts.

Because of Trainor’s pop genre, she attracted a lot of youngsters to her tour. The majority of the Molson Amphitheatre was filled with teens and pre-teens along with their parents. However, the parents seemed to be having just as much fun as their children! It was a nice sight to see. One could say that it was a massive party.

I absolutely loved and enjoyed every aspect of Trainor’s set.  From the set list to set design; the show in its entirety was phenomenal.

There were a handful of special moments that Trainor shared with her audience. Positive and loving vibes spread throughout the amphitheatre. It was almost as if Trainor had a song dedicated to everyone; moms, dads, friends, her fans…

Near the beginning of her set, she performed her song called “Mom” off of her newest album, Thank You. Obviously, she dedicated the song to her mom who was backstage. Before she sang, she talked to her mom through her earpiece and microphone and her mom’s response projected throughout the amphitheatre. It was surreal. They told each other that they loved one another. Also, during her performance, the main screen at the back of the stage displayed clips of memories with Trainor and her mom. Truly touching. I may or may not have shed a couple of tears.

Then, right afterwards she said, “You can’t perform a mom song without a dad song” – and then proceeded to play “Dance Like Yo Daddy,” which is also from her Thank You album. This was more of a fast paced tune whereas “Mom” was just a tad bit slower. There were video clips of Trainor and her dad playing in the background during this song as well. The clips mostly showcased Trainor and her dad dancing as one could have easily guessed.

Two songs later, she performed “Friends” which, again, is from her Thank You album and also highlighted memories of Trainor and her friends on the video screen.

Finally, her last dedication went out to her fans. She mentioned that she wrote “Thank You” specifically for them. She closed out her set with that song (not including the encore). She was extremely thankful for her fans and even brought a bunch of them to join her on stage, including a couple of moms! There was a party on stage.

I cannot forget to mention that Trainor’s performances of her hit singles were outstanding. She even switched up the beat for a couple of them, which was refreshing.  The hits included: “Me Too,” “All About That Bass,” “Lips Are Movin’” and “NO.” She even performed a short cover of Drake’s “One Dance.”

Trainor’s set design was fairly simple. There was a tall, narrow screen at the back with two platforms for her band on either side. There was room in front of the screen on the platform that connected the two for Trainor and then there was the main stage at the centre in front of the whole platform.

Trainor’s dedication and passion for music and her tour are truly admirable. If you were able or are able to catch Trainor’s Untouchable Tour then you will get to witness the talent that this 22-year-old woman possesses. If you like to dance and party then check out her website for upcoming tour dates!