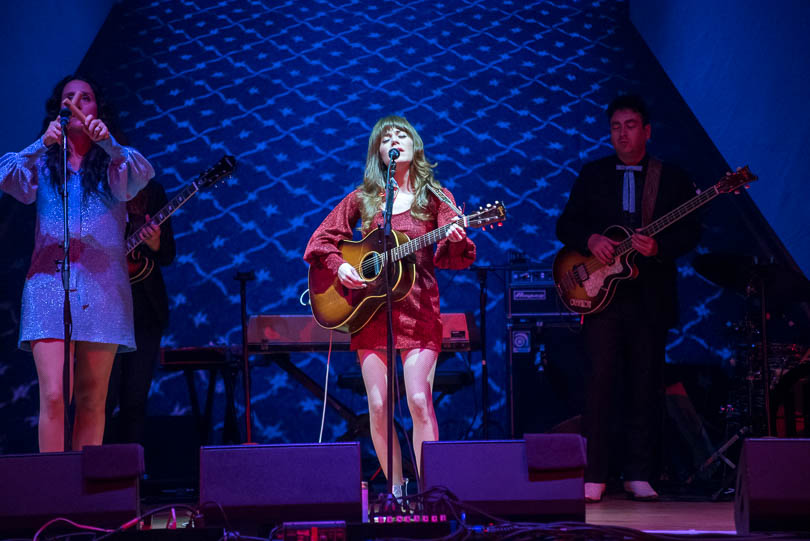 Jenny Lewis may have grumbled that she disliked birthdays and anniversaries but there was no denying that there was a celebratory feel to her show at Massey Hall.

Lewis had reunited with Chandra and Leigh Watson, aka The Watson Twins, to hit the road for a tenth-anniversary tour in support of her classic solo debut Rabbit Fur Coat. After a short but mesmerizing set by Toronto’s The Weather Station, Lewis hit the stage and held the audience spellbound over the course of two sets.

The first saw her play RFC in its entirety. Lewis and the Watsons took the stage walking up the center aisle, holding candles and singing ‘Run, Devil Run’ acapella before launching into ‘The Big Guns’. ‘Rise Up With Fists’ displayed the impeccable harmonies between Chandra and Leigh Watson.  The band received a big cheer and a hero’s welcome as the song came to an end.

Throughout the set, Lewis and the Watson Twins performed choreographed dance moves. When Lewis played ‘Melt Your Heart’, the spotlight was focused on her. In keeping with the times, Lewis updated the lyrics of ‘You Are What You Love’ to include a line about texting.

The band jammed as the ladies left the stage and Lewis returned a few moments later in a pantsuit before launching into one of the evening’s many highlights; an absolutely mesmerizing take on ‘Rabbit Fur Coat’ that saw her flub the lyrics.

“I was right there, man!” she said, laughing. The second take went flawlessly and she held the audience spellbound. The band returned to the stage and played their cover of The Traveling Wilburys’ ‘Handle with Care’ that saw the audience singing along and wrapped up with a harmonica solo by Chandra Watson.

Lewis took a seat at a keyboard for the gorgeous ‘Born Secular’ and led the audience in a sing-along of ‘Happy (Reprise)’ to wrap-up the first set. When the band left the stage, there was a slight misunderstanding as many thought the show was over.

The second half of the set saw a new backdrop featuring the same pattern on the blazer Lewis wears on the cover of her latest album The Voyager. Lewis and her bandmates kicked off the second set with ‘Head Under Water’ and ‘Just One of the Guys’ from the album. A box that the diminutive Lewis could stand on was brought on stage. She joked that felt powerful yet small next to the 6′-tall Watson Twins.

She debuted a new song called ‘Red Bull and Hennessy’ that resembled the music of her former band Rilo Kiley. She even played a Rilo Kiley song, ‘I Never’. Her second album, Acid Tongue, is admittedly mediocre but one of the songs from it, ‘See Fernando’, gave the evening another highlight that saw Lewis standing right at the edge of the stage. Lewis and the Watsons performed a short, fun acapella number about kicking a no-good man to the curb. Lewis trotted out ‘Door’; a song by her new project Nice as Fuck that had a roots-rock feel that was in line with her solo material. She handed out flowers to people in the audience during ‘She’s Not Me’ before leaving the stage.

If there was any real complaint to be had with this otherwise amazing evening, it was that the sound was a bit murky at times and there was no encore. But after two sets, including playing Rabbit Fur Coat in its entirety, the audience was doubtlessly happy as they headed out into the rainy night.

Check out the video for ‘One of the Guys’ from The Voyager;