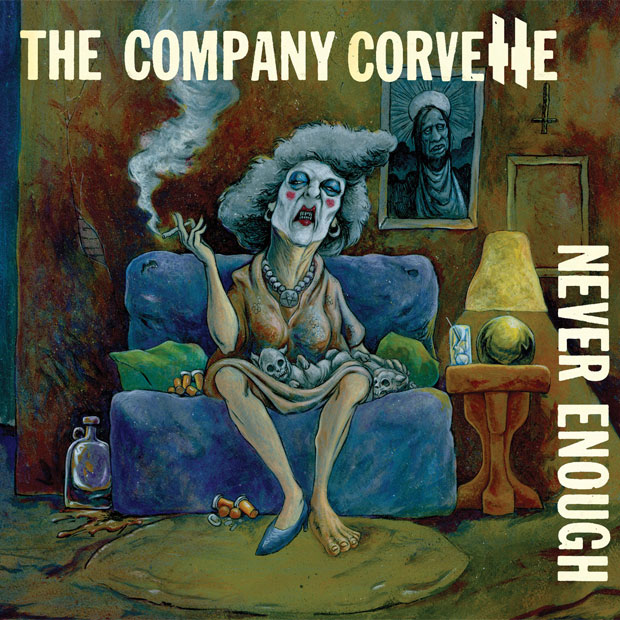 Philadelphia group The Company Corvette are just coming off of playing at Psychofest down in Las Vegas, with headliners that include Electric Wizard and Boris. After releasing two full-lengths – in 2009 and then in 2011 – the band have bided their time to release Never Enough, their third recording as a band and the first in over half a decade. So how does it rank?

The answer is: like early Electric Wizard, complete with equally lo-fi production. This would be an asset, were it not for the fact that there’s little that grabs the listener on this album. Nothing rises amongst the noise, which is a shame, because the ideas on the album seem like they would make for great live performances. Some exceptions are present, and they are the lightning rod moments for any positive praise I would use for the band, such as the horrendously heavy breakdown in “The Stuff”, and the genuinely engrossing intro to the album on opener “Foot In Mouth”.

Ultimately though, there is a “love it or hate it” component to the guitar tone and vocals. The former, at times, sounds like the emanations of something that might have come out of a Jim Henson workshop, or at least the guttural utterances of a guitar that has seen far too much distortion and is crying for help (for an example of this, look no further than the opening of “Devilwitch”). This along with the vocal delivery at times leaves the listener with the choice of loving or leaving it. Nowhere is this clearer than on “Sick”, with its genuinely nauseating vocal delivery. Though it should be noted elsewhere this is not much of an issue, the vocals are also never really strong enough to highlight the music being played.

The best stoner bands have something hypnotic about this quality, something that lets the sound of it act as another layer. On Never Enough, there is something that approaches that quality but is disturbed by sudden changes in style of delivery. Overall, the album feels underwhelming. Which is a shame, because the ideas on the clipboard are solid; it’s just the execution that leaves the listener wanting.