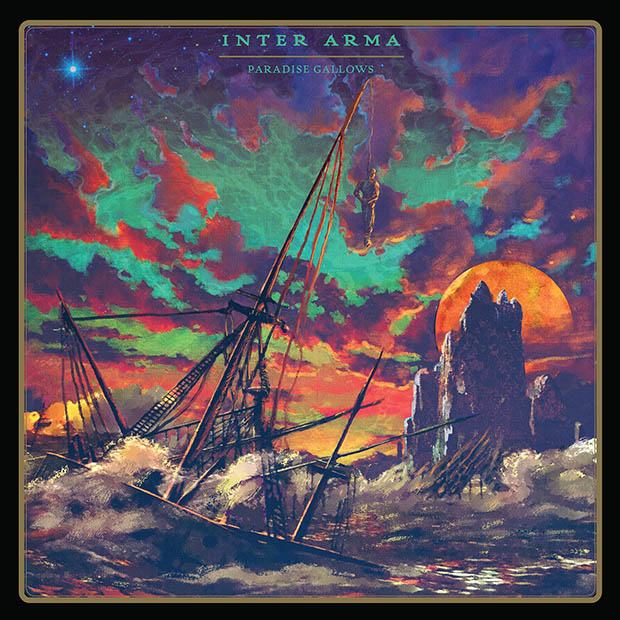 Richmond’s Inter Arma is of the mind that a deliberate, but shape-shifting, steadiness and thoroughness wins the race and that quickly getting to the crux of the matter is all fine and dandy, but what’s so special about getting to where you need to get to in 15 seconds or less? Unless you’re spitting things out in a type-A grind band, of course.

A band called Motorhead once wrote a song on the edges of this topical wheelhouse called “The Chase is Better than the Catch”. That’s not to say Inter Arma has taken on the persona of a narcissistic Romeo only looking to get his dick wet in the slightest, but instead they know the value of laying down bait patterns over the long term and that sitting in a camouflaged shooting tower for hours on end actually trumps the moment the bullet pierces the heart of their prey. Exchange that few hours for a few minutes and any manufactured instruments of deadly and propulsive violence for the (mostly) traditional instruments of a metal band and you’re talking more Inter Arma’s language. And no, they don’t sound like Motorhead; instead the quintet comes from the sludge/doom side of the spectrum and even then they provide an exceptionally more nuanced and textured version of the standard barrage of rumbling chords and tremor-inducing rhythm patterns.

Where Inter Arma display a specialty is in their seamless incorporation of southern rock, experimental ambience, Americana, black and death metal on to the already distinctive power chord lurch they’ve regularly been employing since 2010’s Sundown and which leads Paradise Gallows, their third album, into an incendiary morass after elegiac opener, “Nomini”. “An Archer in the Emptiness” combines blasting drums with a colossal riff that replicates an army of sasquatches wrestling a pack of black bears on a craggy hillside. Drummer T.J. Childers provides the variance as he swings to-and-fro, from death metal maniac to bud-huffing space saver and back over the course of said track and the more intricate-sounding “Transfiguration”.

Slow builds, from single-note/chord splaying to a crushing colonnade of droning doom, are the order of the day in “Primordial Wound” (which features some of the catchiest slow motion tectonic riffing the genre has ever displayed), “Violent Constellations” (with its thunderous Mastodon-like timbre tumble), “Potomac” (an interlude with more in common with classic southern rock wahoo-ing than anything hesher-related) and “The Summer Drones” (a combination of hypnotic guitars, dynamic battery and an eerie layer best described as ‘southern-fried drone’). Hell, epic album closer even has a part that demonstrates how to make acoustic guitar and clean vocals sound epic and effective.

Take that, the entire genre of twee singer-songwriter indie emasculation! Paradise Gallows requires of the listener: the patience to let ten-plus minute-long songs unfurl and develop, and the open mind to accept the different and disparate genre strains the band has weaved into their own starting point. Settle in and be rewarded handsomely.

01. Nomini
02. An Archer in the Emptiness
03. Transfiguration
04. Primordial Wound
05. The Summer Drones
06. Potomac
07. The Paradise Gallows
08. Violent Constellations
09. Where the Earth Meets the Sky

Check out the track “Transfiguration”