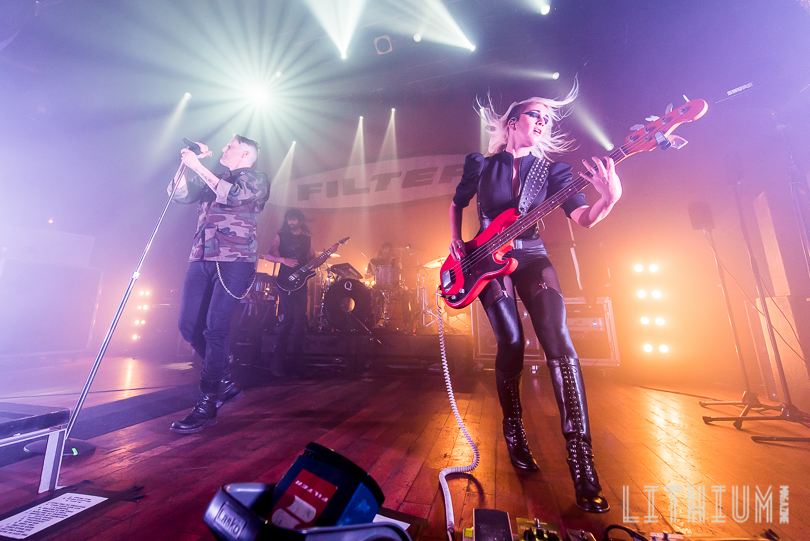 Richard Patrick and FILTER brought a wall of guitars, a rocket blond bassist and their killer catalog of face melting fun to The Opera House in Toronto this past Sunday.  Starting from behind a white curtain, silhouetted by spots from behind, Patrick writhed and snarled out “The City Of Blinding Riots”, one of the new tracks from their April 2016 release “Crazy Eyes”.   Much of the new album is a welcome throwback to band’s electronic, heavy guitar and thundering beat roots of the 90’s.  Patrick’s time in Nine Inch Nails cemented his penchant for the headphone-filling roar of hard and fast.

Pulling their 19-song setlist together with a good dose of 9 tracks from the new album was well received from the fans at the intimate venue.  Patrick worked the vocals chords to the limit, giving a clinic showing us that he has in fact survived years of excess and bodily bad decisions, mostly intact.  As the only original member of the band, Patrick brought the goods with his band on this tour, the first member only joining in 2014.  It’s impossible to ignore his monster in a small package bass player, Ashley Dzerigian.  She two fingerpicked her Fender P-Basses with ferocious abandon.   Chris Reeve on drums, who was convinced to do an impromptu drum solo at the crowd’s request, even though Patrick joked “he’s not that kind of guy”, kept the drums as big as they should be when mashing out FILTER material.  Bobby Miller handled the electronics and other guitar duties.  Oumi Kapila was introduced as the guitarist/producer who helped Patrick write the latest album, and he absolutely owned the role.

The rest of the set was a nice cross-section of the band’s work.  Patrick told the story of how his dying father mentioned he’d heard “Take A Picture” on the radio, and he was proud of him.  Patrick also quipped that he wasn’t the easiest son to have back then.  The main set ended with Patrick shouting “Fuck Donald Trump, this is Welcome To The Fold”.  The stage show was extra heavy with the fog machines, and the smoke alarms in the building were having none of it.  By the encore, the bells were ringing.  The band decided to continue and overpower them, continuing for two more songs after the bells stopped.

Click on photos to enlarge and scroll through galleries:

The City of Blinding Riots

Nothing in My Hands

Welcome to the Suck (Destiny Not Luck)

Take Me to Heaven

Welcome to the Fold