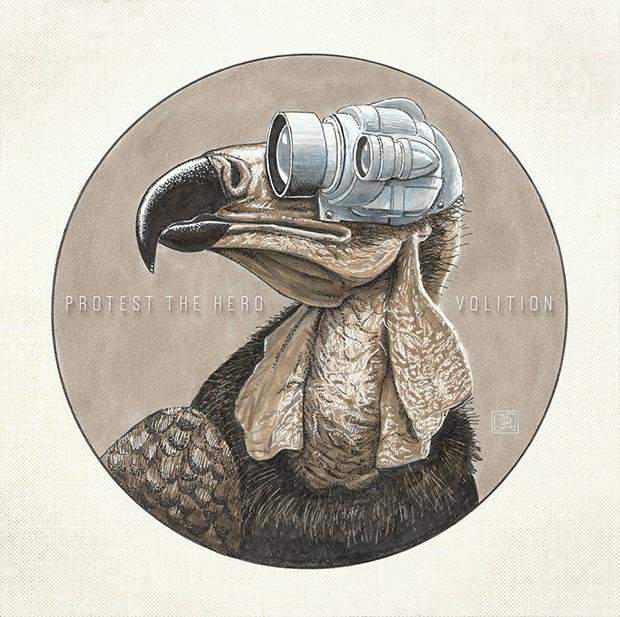 Some people look forward to Christmas. Some people look forward to the best part of waking up in your cup, while others to DJ bedroom parties. I, on the other hand, mark my Advent calendar, ’cause I love the treats, for any upcoming Protest The Hero release in red Sharpie. I’ve been blue ear-ing since their 2011 release Scurrilous, and as with every Protest The Hero album, I learned a new word.

“Volition,” which according to my internet friend Merriam-Webster means “the power to make your own choices,” is unique for a variety of reasons. In its conception, Volition was fan sponsored via Protest The Hero’s online Indiegogo fundraiser campaign, which swiftly met its goal as fans realized… more PTH. But then, the winds of mourn blew as their former drummer, Moe Carlson, announced that he’d be leaving the band. My body almost broke from excitement; however, when I heard that Chris Adler of Lamb of God would be tracking drums for Volition… so many feels, so few neuro-feel-transmitters.

If Volition were a bomber plane and my head Dresden, it swiftly flew into my ear hole and leveled my brain. “It was all over in one stunned, horrifying second,” is one way that the speaker at the end of the track “Without Prejudice” might put it, and I would agree. Stunned by the creativity and intricate composition yet horrified by my blistering finger that developed arthritis from finger blasting my iPod’s repeat button, I tear up at the idea that has been created by few which deem this sound “progressive,” which gives the after taste of “odd ball in the room,” whereas it should be put on a pedestal, much like when undeserving last call vultures prey on the cute barista who’s working her way through college.

Keep an ear out for the messages brought to you in part by Mr. Walker, which have been delicately placed for your hearing pleasure. It might be hard to do as you’re dazzled by his rich tone and vocal performance, but there are many truths, not to mention a tasteful reference to Fortress, their 2008 release.

Fair warning to the guitar players: you may give an involuntarily salute, so you might want to stay seated for the duration of the album. You may also develop the urge to quit guitar, but stay strong… and absorb the brilliance.

Check out the album ‘Volition’