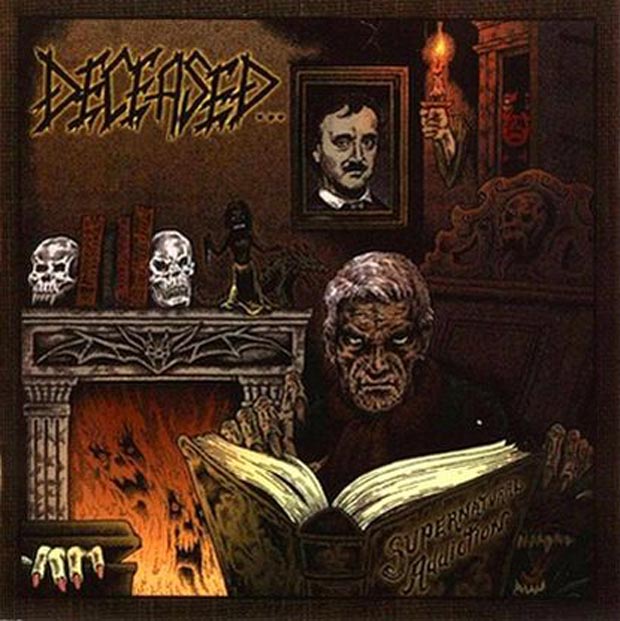 I have to admit that I feel a little bit embarrassed sometimes that I missed out on a lot of metal, both when I was growing up and even in my adult years. I grew up in a small town and had very little access to many releases so, despite the fact that I did do specialty order (and picked up anything that looked even remotely extreme on visits to CD stores in bigger cities), there were still a lot of bands that I totally never got a chance to listen to.

One example is the band Deceased. Despite the fact that they’ve been around since the 80s, my first exposure to them was last year’s Surreal Overdose. Surreal Overdose was a solid album, but did nothing to prepare me for Supernatural Addiction. Originally released in 2000, Supernatural Addiction is a re-release by Hell’s Headbanger’s on both CD and Vinyl which features five additional demo tracks. The album is best described as a cross between death/thrash metal and traditional metal, but with the creepiness factor ramped up to 10.

From the awesome artwork to the songs themselves, everything about Supernatural Addiction just screams the word “classic”. The songs will have both old-school metalheads and newer fans banging their heads and cranking the volume WAY up. Those who have the older version of this album may wonder if getting this re-release is worth it. The answer to that is… it depends. While the demo tracks included are awesome, they are far from essential to anyone but the hardcore.

Check out the demo version of the song: “A Very Familiar Stranger”