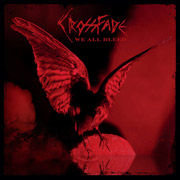 Crossfade – “We All Bleed”

Three years after being dropped by Columbia Records, rock band Crossfade picked themselves up and birthed their third studio album, We All Bleed. Scooping them up for this release was Eleven Seven Music, who helped show the world that these men still had it in them to create worthy hard rock.

Musically, Crossfade offers an alternative/metal mix with straightforward instrumentals and the occasional fast picked overlay. Vocally, the majority of the album is sung softy though there are moments where it switches to loud, almost shouted, singing. As good as Ed Sloan’s voice is however, I question some of the writing/lines as they, at times, can sound off key.

This said, the one aspect that for sure draws me to We All Bleed is the production. In the studio, the group has successfully used every resource at their disposal to give themselves a nice, rich sound. Due to this I’m interested to see if Crossfade can pull off these songs live, or if they are too reliant on the studio environment.