Since 2010 MaQLu has released three EP’s entitled Blood, Black and Haze. To make things easier for their fans, MaQLu has since combined the EP’s to make Blood.Black.Haze, a cheap and efficient way to own all three releases in once compact disc (pun intended). Now that is a space saver of an idea!

After a quick spin through the entire album one notices the songs all sound similar – the slow dissonant beats mixed in with MaQLu’s low vocals drone on for all 16 tracks. I personally felt that having ALL 3 EPs on one disc is way too much MaQLu. Even though the idea is great to save space and money, playing the disc from beginning to end tends to become boring. Now that MaQLu has produced this album i hope she takes a break before her next release to possibly take in new ideas.

Check out the song: “Manifest” 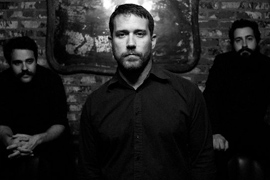