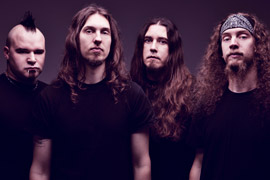 Conceptually derived from the dreams of vocalist/rhythm guitarist Matt Drake and heavily influenced by the passing of the band’s beloved bassist Mike Alexander, Five Serpent’s Teeth is a bold and fearless record that roars with monstrous riffs and rhythm, blazes with neck-snapping speed and showcases the band’s masterful talent and steadfast energy.

Prizing: THREE (3) lucky, grand prize winners will each receive a free copy of Five Serpent’s Teeth. Slither on over and sign up to get the killer thrash CD free.

Check out a 15 minute preview of ‘Five Serpent’s Teeth’