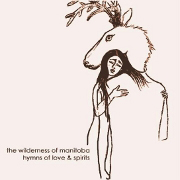 The Wilderness Of Manitoba – “Hymns of Love & Spirits”

The Wilderness Of Manitoba (TWOM) is a decidedly sombre affair and with the founders, Will Whitwham and Scott Bouwmeester temporarily stepping back from the upbeat indie band, Provincial Parks, the twist in musical style points towards a life-changing event having occurred to said members. Make no mistake; this album is not the type that you listen to when you’re feeling good about yourself. The quiet trickling acoustic guitar intertwined with soft, harmonious vocals and a plucky banjo should be reserved for the more dusky moments of your life.

You can almost feel a soft chill as the songs flutter between your ears, but beneath the mournful vibe there’s some great music to be heard. It’s hard to pick a highlight, as the songs seem to combine together resulting in a 30 minute session of quiet genius. Bands are very rarely brave enough to make an entire soft ambient record, but TWOM clearly have an agenda which they stick to and passed with flying colours.

While it shouldn’t be accounted for too much and neither overlooked, the album and indeed the band’s formation itself was influenced by the passing away of Will’s mother and Scott’s grandfather. By covering and also including “Evening”, a song written by Will’s mother, the record is a personal one, but this doesn’t necessarily exclude the listener. The songs will be easily relatable for many people affected at some point by the death of loved ones, but the quality of the music must not be overlooked. Listening to this CD for many people will be like stepping back into the 1960’s, to a time when folk music was a prime genre and was written as well as TWOM do.

It’s not a CD for everyone, especially for those who need an energetic song to wake them from their coma, but for those who don’t mind delving into 30 minutes of sheer, soft folk bliss, this is a great buy.  [ END ]