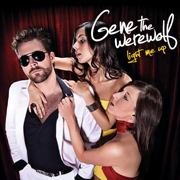 Irony is a dangerous, dangerous thing in the world of music, putting any artist who dabbles in it at risk of mockery, complete dismissal or both. The fact that you’ve likely never heard the name Gene The Werewolf before tells you all you need to know about how the critical response has been towards this six-song disc.

The musical moniker of Jon Belan, Gene The Werewolf plays reaching-for-the-cheap-seats-style glam rock, the kind that David Lee Roth abandoned sometime after Skyscraper (tellingly, Belan tries to echo Diamond Dave’s distinctive vocals on a number of moments on this EP).

But to what end? He doesn’t seem to be playing tribute to groups like Europe and Journey and other glossy arena rock icons, but I get the impression that’s what he would have you believe. So, all this disc seems fitted for is to play spot the reference/influence.

Again, there’s the Roth-like vocals of lead track “Superhero”, which also features a Journey-like keyboard riff and strutting rhythm straight out of the Poison playbook. The ridiculous “Make Love” would make Animalize-era KISS blush with embarrassment, while “I’ve Got The Love” takes a step into ’70s KISS territory. And the less said about the faux R&B falsetto of “Come On I Gene” the better.

If this sounds appealing to you and you happen to live in the Pittsburgh area where Belan resides, I recommend you hold off before paying full price for this CD. If it’s not there already, the used CD outlets are likely going to fill up with guilt/drunken night out purchased copies of this less-than-stellar EP.  [ END ]