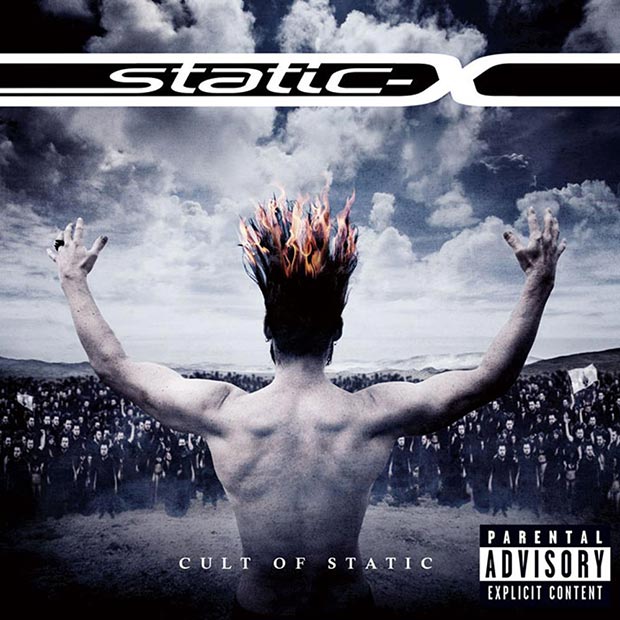 Static-X, a band that has been releasing albums since 1999, recently released their sixth record Cult Of Static. This disc was released 6 days before the 10 year anniversary of their first album Wisconsin Death Trip. Being 10 years old in the music industry these industrial metal heads have gained a following, or as some might say, a cult.

When I first pressed play, I heard bass and drums followed by some programming. Next I heard the one note riff that Static-X is known for. This exact riff is also the verse and chorus, the generic formula that we are used to hearing from this band. A simple formula that fans are ex-STATIC about. The rest of the album features simple instrumentals with programming overlay. And who can forget the unorthodox-haired Wayne Static’s vocals. Fast, a tad distorted and catchy, it’s what really makes or breaks a Static-X song. As with all their recordings the vocals are very singable. I caught myself trying to sing these tunes (as I have every with other Static-X record).

Speaking of Wayne Static, look at the cover of Cult Of Static. See the barebacked man on the front? It’s Wayne and his vertical hair on fire. My guess is the 20 minutes of hair spray burst into flame when the recording of the album got too hot. Thankfully, it looks like many members of the Static-X cult are standing in front of him. Hopefully one of the many thousands can help extinguish the flames. I have to say out of all the album titles/art this is one of the best mixtures I’ve seen to date.

Now for some trivia for the true Static-X fan. Cult Of Static is the band’s first album without a title track. In other words no songs are named “Cult Of Static”. Also, sorry to disappoint, but as with the album Cannibal there is no track with the word ‘Otsego’ in it. Finally, my last little bit of information is that on the track “Lunatic”, the first guitar solo was done by none other than Dave Mustaine (Megadeth).

10 years after their first album, Static-X are still able to create great music for their fans to enjoy. It is always encouraging to see a band last that long, producing music that is just as good as their old stuff. Hopefully they will stick around for another 10 years and keep to this great formula. Now if you will excuse me I must get back to listening to this CD.  [ END ]