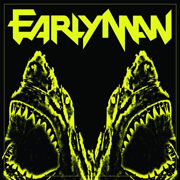 Hailing from Brooklyn, Early Man appeared on the scene in 2005 with a brand of metal that has grown from the influence of Metallica, Sabbath and Ozzy. Beware The Circling Fin is their 3rd release and first since 2005, but the sound will be quite familiar to fans of the band’s first two releases.

The story of the band’s frontman Mike Conte and dummer Adam Bennati is an interesting one, if Wikipedia is any source of truth. Allegedly, they were sheltered children of Christian Pentecostalist parents, and only discovered rock music around the age of 19. Perhaps that’s when they began devouring a healthy dose of some of rock and metal’s most classic bands and began crafting the sound they have today. Proto-metal influence comes through in spades on all their releases, and Beware The Circling Fin is no exception. Maybe it’s no coincidence that the sound they have developed is so similar Black Sabbath and Ozzy, since those pioneering bands were discovering metal themselves, albeit for the first time, just as the supposed bubble boys of Early Man finally did in their late teens.

The album’s first track, “Sinking the Blade”, is a close cousin of Metallica’s “Seek and Destroy” from their 1983 debut Kill ‘Em All. The song has a classic metal riff and simple punk-style vocals. It’s not only the circling fin you need to beware of on this album, it’s the killer blade (and riffs) sinking into you! On this track and all others, it’s obvious Early Man has picked up on what made their forefathers so great.

The EP’s title track starts off with a riff that will sound familiar to any fan of classic 70’s or 80’s metal, and features a soaring wail from vocalist Mike Conte that must be in some small way a nod to Robert Plant’s opening on Zeppelin’s The Immigrant Song. It’s definitely epic.

The album’s third track, “Coiled Like A Snake”, contains a nice build-up during the verse sections, ultimately reaching another epic release with guitar riffs to match. The progressive structure of the song fits the title well, and there’s even a subtle snake rattle to be found in the background.

On this 4-track EP, Early Man impresses with their ability to bring something new to each song and create a unique sound for themselves while staying within the guidelines that the Prince of Darkness laid down in his early years. To this effect, closing track “Suck Me Dry” goes into punk territory with its catchy intro and faster rhythm, clocking in at just 1 minute and 31 seconds. Perhaps Early Man has something in common with early punk just as they do classic metal, showing influences here of another New York 3-piece known as The Ramones.

If you’re longing for the good old days of classic metal, look no further than this short album by some devout revivalists of that era. While many of metal’s pioneers have moved on to other things like MTV and short haircuts, Early Man is still out for blood and carrying the torch high.  [ END ]