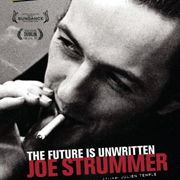 Joe Strummer, The Clash’s frontman died in 2002 of a heart problem that no one knew about. Love him or hate him, there’s no doubt his death came as a shock to everyone and has caused much reflection on The Clash and Joe Strummer’s importance in the world today.

Director Julien Temple has drafted in some of Joe’s closest friends and also some big names to share with us their experience of Joe and how he affected their lives. Celebrities such as Bono and Johnny Depp tell us their side of how The Clash were so good, but also the points that held the band back and that ultimately killed off the band. Close friends of Joe describe how he was a caring person full for charisma. However, Julien Temple makes sure there are two sides to the story. The people closest to Joe reveal how he was very confused man. He failed to cope with success and there are many conflicting views of whether Joe’s personality was indeed real, or fake.

However, what we learn from the end of the film is that Joe finally found out who he was. After the Clash, Joe could be described as merging into mediocrity. Director Julien Temple has hours and hours of Joe interviews and therefore we have a running commentary from Joe himself about how he felt throughout his life and how he got through his tough years. He reveals that he felt he was never a punk rocker. He was simply a hippie that was just “happy to be alive”.

The documentary is maybe a bit long for casual Clash fans, however, there is no doubt Julien Temple needed the two hours to tell us how great Joe was, then how fame brought out some of the worst out of him, but ultimately at the end, we see Joe was happy and whether we love or hate him, we feel glad that he found what he was looking for.

The documentary was too long for non Clash fans and there was no description of who was who and for anyone outside The Clash circle would have difficulty understanding who was talking or on camera at that moment.  [ END ]