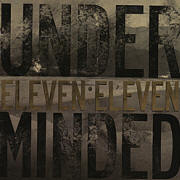 “Enough is enough! Now beg for forgiveness, you fuck!” Much like every Arnold Schwarzenegger movie tagline, this line is cheesy, but in the right context it can incite a frenzy of excitement. Such is the case with the entirety of Eleven:Eleven: the record is predictable, and maybe even too familiar, but it works. It works by covering its blemishes and highlighting its strengths (much like 80 per cent of the fashion industry); and even though the album has its snags, listeners can easily turn a blind eye and immerse themselves in the straightforward and fun nature of this record.

The band plays a similar fiddle to that of Norma Jean or The Chariot in terms of chaotic metalcore that rotates between dissonant guitars and crisp-as-fuck breakdowns. For anybody wondering, there’s nothing on Eleven:Eleven as brutal as “It’s Kinda Like A Bodybag”, but the tracks overall are better than any offering on Hail Unamerican! The opening track, to its credit, is one of the best epic openers I’ve heard, that seemingly come standard with metal releases. Right after a great buildup, Nick Martin screams out, “Ya Basta!” in one of the most blood-curdling howls in recent memory, and the intensity rarely wears off.

Vic Fuentes of Pierce The Veil and Mark McKnight of Atreyu contribute guest vocals on the album. The former brings some wanted and needed charm, while the latter certainly does not.

Undermined tends to stick to the beaten path, and that’s okay. Every breakdown can be sensed at least two bars in advance, but that’s okay, too. Really, like the entire Schwarzenegger catalogue this record isn’t meant to be over-thought; it’s meant to be enjoyed in an army helmet and shirtless, a reminder of all that is primitive and man.  [ END ]