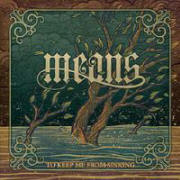 Means – “To Keep Me From Sinking”

With just over a year having passed since the release of the well-received Sending You Strength, Regina, SK-based Means have returned with To Keep Me From Sinking. Thankfully, the new Underground Operations (and seasoned Facedown Records) family members haven’t sacrificed quality for haste with this album, and in fact have adopted some new tricks that one might think would’ve required a longer learning curve.

The element that struck me as the biggest difference from Means’ ’07 release is Dylan Johnstone’s vocal performance, which has turned from a beastly growl into a shrill and coarse hollering. I can foresee a lot of folks crying wolf over this unexpected transition, but much like the story I’ve alluded to with my brilliant reference, the complaining isn’t warranted at all. I actually prefer the vocals on To Keep Me From Sinking, and I’ll tell you why: I’d rather hear a guy straining to wrench every last drop of passion from his scream over the all-too-common Cookie Monster (forgive the abused allusion) roaring. Haters need only reference Shai Hulud’s That Within Blood Ill Tempered for a case-in-point example of this vocal style working wonders.

Johnstone’s sung vocals have stayed relatively consistent, be that for better or worse. While I do enjoy the way they usually fit into each respective track, they sometimes lack definition; though this isn’t too prevalent an issue to deter me from listening to the entire album, but it’s worth mentioning.

The rhythmically-driven nature of the band’s musical output is certainly what gave Sending You Strength its magic, and it thankfully returns on To Keep Me From Sinking. While I’ll say the release usually seems more focused than it’s predecessor, there are a few holes in the record, filled regrettably with rehashed breakdowns instead of the band’s trademark spacey, high-energy riffing.

At the end of the day, To Keep Me From Sinking captures much the same from Means in terms of uplifting lyrical content and well-composed, creatively off-kilter metalcore. There are some elements of past material I wish were more prevalent on this album, but it certainly carries a more notable maturation than its release date might have you believe. The band has only solidified their place atop the pyramid of their peers, and if they can find a way to mesh the strengths of their past two full-lengths on future releases, expect them to become contenders for the pinnacle.  [ END ]