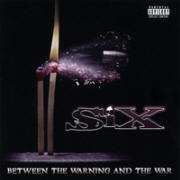 Metal has undergone some major changes since its creation. Metal has evolved from the classic style, perfected by bands such as Black Sabbath and Aerosmith, to raw, jaw-clenching metal. There are few bands that try to re-imagine the genre even more than the legends. SiX is one of those bands. With the combination of metal, punk, hardcore, and classic rock/metal, there is no doubt in my mind that the band will reach legendary proportions. The band has already toured with some of metal’s top musicians, including Chimaira, Dope, Disturbed, and Slipknot. The latest album by this powerhouse? Between The Warning And The War.

The album kicks off with “The Day I Died”. Right off the bat, the band steps it up a notch. With the bass skills of Tony Campos (Static-X) featured throughout the song, it’s understandable how this track has even more power than anticipated. It’s great to see Campos veering away from his industrial influences and attempt something more experimental.

There are a couple tracks on the album that have guest appearances. Both “Warning” and “The Day I Died” have Campos on bass, and “Forgiveness” contains the amazing grace of Mike Clark of Suicidal Tendencies on guitar. “Forgiveness” is one of the best tracks on the album in my opinion. The entire song is pretty much saying ‘Don’t say sorry when it’s already been done. There’s too much damage to be repaired.’ I bet everyone has experienced something to make one feel that way. We can all relate to this track.

There is a hidden track at the end of the album. The majority of it is the sound of a jack-in-the-box. Near the end, the band is heard talking over top of it, and then somebody exclaims, “It’s fuckin’ perfect!” I’m not too sure what they’re talking about, though.