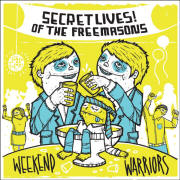 Secret Lives! Of The Freemasons

Secret Lives! of the Freemasons play the kind of melodic rock that just makes you want to get in your car, roll the window down and sing-along! In this day and age of metalcore bands screaming and growling their way through entire records, it is refreshing to find a band where the singer actually weaves melodies instead of deconstructing them.

The band relocated to Winston-Salem and recorded Weekend Warriors with producer Jamie King who is known for his work with heavier bands such as He Is Legend and Between the Buried and Me. The move paid off in spades; King’s crisp mix fits the bouncy arrangements perfectly. The sextet’s carefree arrangements and hooky guitar refrains recall Hot Rod Circuit’s poppier moments. Their entire approach actually brings me back to 1999, when bands like this were more common. There are fully realized lyrical ideas and dynamic shifts around every corner, and the dissonant chords that push and pull the verses of “Dirty Laundry” set up the kind of triumphant chorus that most bands would kill for!

From beginning to end, this one never lets up from delivering one earworm after the other. Time will tell if Secret Lives! can reach a larger audience that most Victory artists enjoy, but what is certain: they deserve it.  [ END ]