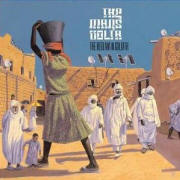 I want to set something straight: The Mars Volta are not a prog-rock band. Their musical style is far too diverse to be pigeonholed into a specific genre. Another thing: Omar Rodriguez-Lopez is not an egotistical prick. Any distorted walls of noise you hear on-album or live are intentional. Watch/read some interviews instead of jumping to conclusions.

Moving on to The Bedlam In Goliath…holy fuck. Apparently the Volta flipped the bird to balance and dropped a house on the heavy side of the scale. Gone are the multi-movement opuses that shift between bombast and elegy. Instead, Goliath bursts with focused blitzkriegs (“Wax Simulacra”, “Ouroboros”) that are as dense as a neutron star.

Though, I must note—because I think I’m the only one who has noticed this—that the chorus in “Tourniquet Man” sounds nearly identical to the chorus in “Hero” by Enrique Eglesias. Perhaps it’s just me (and I fucking hope that it is), but it’s reason enough to skip track six each time I give Goliath a spin.

Aesthetically, the album makes a logical progression from Amputechture. The Volta’s last album seemed to tiptoe around the Middle Eastern motif, but Goliath doesn’t beat around the bush. While the former treated you to a week stay at the Hilton in Jerusalem, the latter takes you for a twilight stroll through the streets of Beirut on a rampant, paranoiac heroin high. The result is the Volta’s most conceptually cohesive album since De-Loused In The Comatorium.

Despite the Eglesias apparition, the ouija board that plagued the band with a series of bizarre and unfortunate occurrences has inspired one of the best Volta recordings yet. Goliath reeks of film noir (“Agadez”, “Soothsayer”), is permeated by six-stringed assaults, and features some of Cedric Bixler-Zavala’s most delicious melodies (“Ilyena”, “Conjugal Burns”) to date. Yet another testament to this band’s genius.  [ END ]