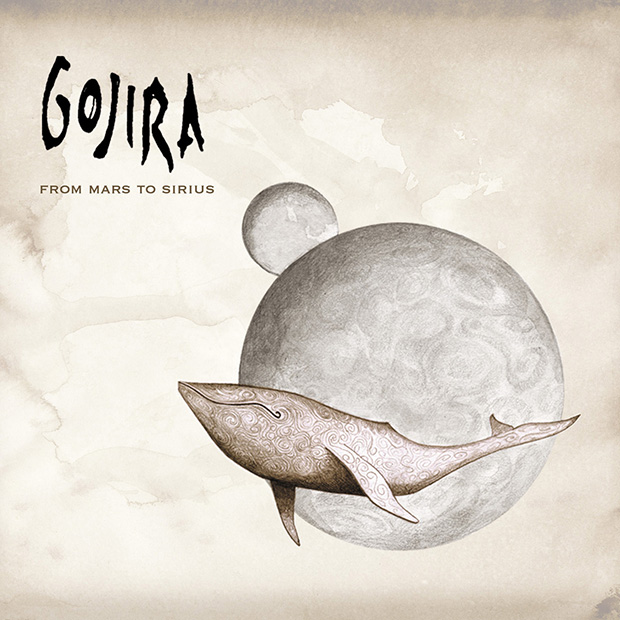 From Mars To Sirius is the third album from French rockers Gojira. The success of their first two independent albums led to a label signing and the resulting international exposure of From Mars To Sirius. The four-piece (which uses English vocals/lyrics) have a unique metal style which is a blend of death, trash, and prog. They are currently touring North America until at least mid November 2007.

The music on this hour + album receives 4 out of 5. Apart from the ambient instrumental Unicorn, every song on this 12-song creation is a bone-crushing precision assault. An onslaught of thrash riffs and guitar squeals and slides are blended with a non-stop double kick. The vocals range from death growls, to screams/yells, and conventional singing. Songs range from just over two minutes to nearly eight. Despite this seeming inconsistency it all works in context. The longer songs simply have extended ambient intros while the short ones may not have any. It sometimes takes minutes for an ambient start to reach catastrophic heaviness, but the journey is worth it. In the case of the double track From Mars/To Sirius the first track is a two and a half-minute relaxed intro to the intense single of the album. The most important musical aspect of the album is that Gojira have created their own unique style of metal. If you haven’t heard it, imagine Fear Factory precision mixed with the progressive styling of Mastodon and you’ll be pretty close. Occasionally the album does drag a bit due to its length, but otherwise it is near perfection.

For specific considerations, From Mars To Sirius and Gojira receive 2 out of 2. Gojira’s previous two albums: Terra Incognita and The Link created a solid fan base for the band, both in their native France, as well as the rest of Europe. They were little known in North America however. From Mars To Sirius gets credit for bringing Gojira across the oceans, and for boasting greater production value than the previous releases. Creativity is the final reason that Gojira have aced this section. An environmentalist concept album based on flying whales from outer space? Some hardcore/straightedge bands have certainly tackled environmental issues, and outer space is not a foreign topic to metal. But both together, that must be a first.

Sound quality of From Mars To Sirius gets 2 out of 2. Everything sounds great and the whole album can be played loud without distorting. Each instrument cuts through the mix while still maintaining a unified sound. The guitars are a great heavy crunch and all the squeals, slides and other ornaments are loud, clear, and defined. The bass is strong and audible and the drums are just as loud as can be without overpowering everything else. Vocals are clear and have the right amount of effects when needed.

The physical attributes of From Mars To Sirius receives 1/2 out of 1. The eight-page booklet contains the song titles, lyrics, and the usual who/what/where recording info. All of this is super imposed over scribbled drawings of dragons, solar systems and other themes from the album. A flying whale in outer space adorns the front of the cream/off-white coloured insert. It is nice to see a light coloured design in contrast to all the dark ones, but other than that it’s nothing impressive. A little more insight into the themes and characters would be nice.

From Mars To Sirius earns a final mark of 8.5 out of 10. Definitely an album worth obtaining. Gojira has a fresh new sound that will appeal to fans of death, thrash, and prog metal. The songs on this album are all well written, well produced, and have great sound quality. Unless you have a phobia of whales, From Mars To Sirius will make a perfect addition to any metal CD collection.

From Mars To Sirius Track Listing: