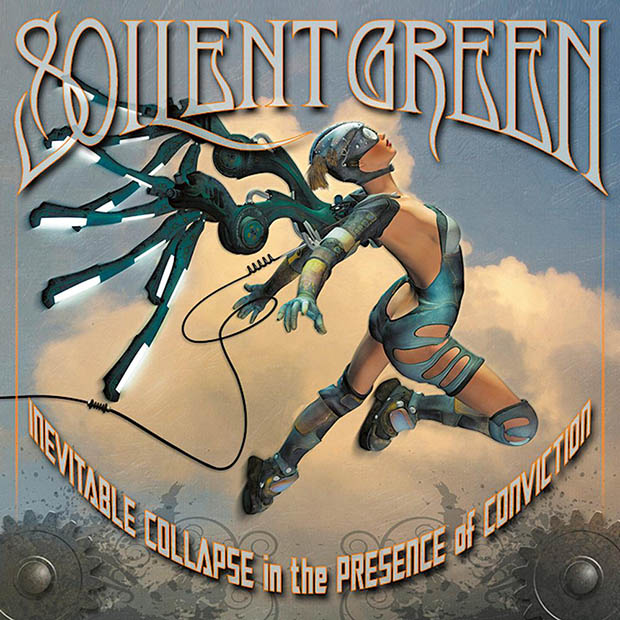 I actually listened to this album all the way through. Never again.

If Pantera sucked, and huffed eight lines of coke cut with meth before each take, Inevitable Collapse in the Presence of Conviction would be the result.

Uber l33t guitar skillz and schizophrenic song structures do not make for an enjoyable experience. Sure Soilent Green can shred the scales off a weathered dragon, but what’s the purpose? I find none, other than the band’s desire to musically fellate themselves for an ENTIRE ALBUM.

The multitude of tempo and time signature changes remind me of the kid in driver’s ed who would jerkily speed up and slow down—exponentially multiplied—for no apparent reason, other than not knowing what he/she should be doing. That’s exactly what’s happening on Inevitable Collapse. Soilent Green tries to jackhammer the square block into the round hole, and then the triangular block into the star-shaped hole, and then the cylindrical block in the triangular hole, ad absurdum.

Soilent Green have several good ideas (acoustic intro on “In The Same Breath” with…a UKELELE? Yes!), but they ingest them, puke them back up, and leave them as is. Listening to this album can be likened to said biological process.

I learned something after listening to this album: melody is important. When music becomes devoid of melody, it a) is no longer music, and b) is only enjoyable for people who throw dead kittens at their inbred siblings.  [ END ]

01. Mental Acupuncture
02. Blessed In The Arms Of Servitude
03. In The Same Breath
04. Antioxidant
05. Lovesick
06. Rock Paper Scissors
07. Superstition Aimed At One’s Skull
08. For Lack Of Perfect Words
09. When All Roads Lead To Rome
10. All This Good Intention Wasted In The Wake Of Apathy
11. A Pale Horse And The Story Of The End