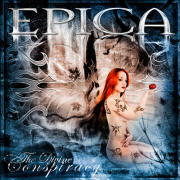 Back in 2002, symphonic metal was changed forever. Sahara Dust was formed, which soon became known as Epica. Since then, the band has played with masters of symphonic metal, such as Kamelot (which, strangely enough, Epica is named after). Epica is similar in style to Kamelot and Nightwish; they have an operatic female vocalist, and the occasional rough growl issued from male vocal chords. Since 2002, the band has put out 4 studio albums, as well as a stack of EPs and demos. They’re a busy band! The Divine Conspiracy is their latest.

The album opens up with a prologue that’s filled with soothing vocals and violins, giving the listener a hint of what’s to come. After the intro, guitars tune in and the metal begins.

“The Obesessive Devotion” utilizes keyboards, distortion, double bass, and of course angelic vocals. The backing growls add a gothic element to the music, sending chills up and down the listener’s spine. “Beyond Belief” is one of the most intense tracks on the entire album. The power behind the music is unbelievable. The introduction is heavy and fast, while the chorus is mellow. The vocals seem to be more powerful on this song, perhaps because the band could relate more to this track. Though there aren’t a lot of male vocals on this song, the track doesn’t need it; it’s powerful enough without the raw vocals. The bridge was my favorite part—palm mutes, pinch harmonics, and an all-out groove.

Given the groundbreaking musicianship throughout this album, I think it’s safe to say we can expect monumental things from Epica. It won’t be long until bands that are forming as we speak will want to tour alongside Epica.  [ END ]