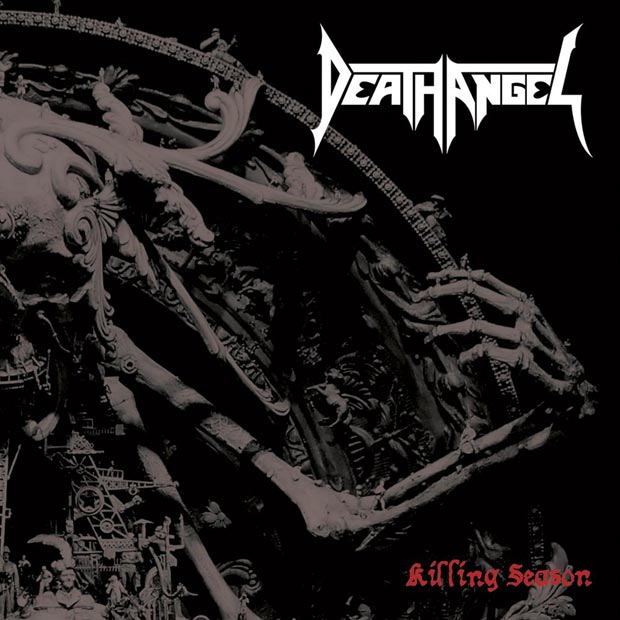 Death Angel is back with a new album titled Killing Season, the band’s ninth album in their twenty-two year career. With the release of this album comes a sigh of relief from Death Angel’s fans all over the globe; after all, it has been a long four years since the release of The Art Of Dying, and fourteen years between The Art Of Dying and Act III! Thankfully we did not have to wait another ludicrous amount of time for some sick new tunes.

Every member of Death Angel is extremely talented, and it is truly a pleasure to listen to each and every track on Killing Season. Mark Osegueda (vocals) brings an unmistakable thrash presence with his gritty, distinguishable voice. The exquisite guitarists (Ted Aguilar and Rob Cavestany) take my breath away with nearly every guitar riff. They keep it simple, but sound so excellent. Dennis Pepa (bass) also plays with a great level of expertise—if only I could get to his level…but that’s beside the point! He is an inspiration to myself and certainly other bass guitarists around the world. Last but not least, Andy Galeon (drums) brings what one would expect from any drummer signed under the Nuclear Blast record label: loud, aggressive, and exhilarating drumming.

“God vs. God” has an interesting introduction. When I first listened to it I almost immediately changed the song because it seemed dull. However, I went against my gut instinct and continued to listen even though I felt it might pain my ears. It turned out that my gut instinct is not always right! The song went quickly from what I thought was terrible, to the best song on the album. The bass guitar is riveting, the lyrics are wonderfully written, and the guitar riffs and drums are exceptional. What really attracts me to this track are the lyrics; but you need to listen to them for yourself to really get what they’re about!

I enjoyed Death Angel’s Killing Season very much. It was actually better then I originally expected. If you haven’t picked it up yet, do yourself a favour and check it out.  [ END ]