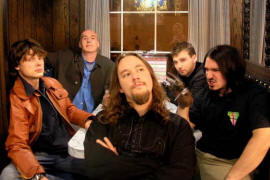 One trend that has become far too common in new rock and alternative music over the last several years is the lack of diversity in sound between different bands. We saw it with all the grunge bands that became popular in the early to mid ‘90s and then the nu-metal/rap rock movement of the early twenty-first century. Inevitably, fans and critics get tired of listening to bands that sound the same and the cycle repeats itself again. While many bands end up falling into these movements, one group that has resisted this conformity is the five piece band known simply as 3. 3 is a band that has recently begun to receive some major mainstream attention thanks to their highly successful album Wake Pig, but it might come as a surprise to some that the band has been together and playing shows for a decade now.

Long before the promising North American success that they are now experiencing, 3 was a little band from a small town in New York State. The band came together in the early 1990s in of all places, Woodstock, New York, a place definitely known for its rock and roll but not for being a breeding ground for new rock bands. Soon after forming, 3 garnered a strong local following in and around Woodstock which helped the band receive attention from interested record labels. After considering several offers, the group signed with Planet Noise Records, a label based out of nearby Kingston, New York. Shortly after signing with Planet Noise, 3 released its debut album in 2000 titled Paint By Number, a fourteen song disc that received positive reviews from fans and critics alike. Like every other band trying to catch their break, 3 toured extensively behind Paint By Number which created an even larger local buzz about the band.

This strong buzz began to spread around the country and only grew further after 3 released their third CD Summer Camp Nightmare in 2003. Not only did the album show great development in the band’s sound, but it also attracted the attention of fellow New York band Coheed and Cambria who themselves had just begun to receive major mainstream attention. After Coheed and Cambria got their hands on 3’s album, they asked 3 to join them on tour which really helped extend the hype surrounding the group to the rest of the U.S. Not about to let the momentum they had going simply falter and go away, the members of 3 worked diligently to write and record a new album while on tour. The result of this hard work is Wake Pig, the major breakthrough album that the group was looking for.

Despite the fact that the Wake Pig disc has just recently become quite popular, the album was actually originally released in 2004 by Planet Noise Records. To help get their music out to more people, 3 signed a new record deal with Metal Blade Records in 2005 and re-released Wake Pig the same year. Metal Blade has become one of the premier hard rock and metal record labels in North America, amassing a roster of bands that include names like As I Lay Dying, Cannibal Corpse and Unearth so it was a no brainer for 3 to sign a deal with them. The re-release of Wake Pig features several new bonuses, including two new songs, new lyrics, new artwork and a few re-mixes. Since its re-release, Wake Pig has been receiving some excellent reviews for its dynamic sound and musicianship. The disc’s thirteen tracks also feature some outstanding production from producer Tom Benton, an up and coming metal producer in the United States.

Riding on the success of Wake Pig, 3 has been hard at work touring the United States, just wrapping up a six week long tour on June 30th. The band has some huge dates scheduled in early August, opening for Coheed and Cambria and the Dillinger Escape Plan. Also look for a new album from 3 in the not too distant future. Keep an eye and an ear out for the band 3 as you’ll likely be hearing that name and number for a long time to come.  [ END ]