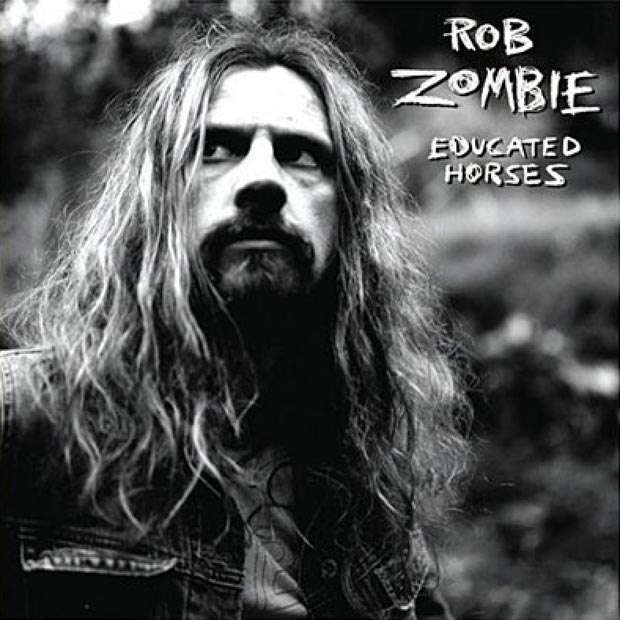 It’s interesting to see when an artist breaks away from groups they have created and start on their own solo venture. Fans tend to go with the flow of the person who left, so a dedicated fan base follows while others feel betrayed, and others jump on.

This is Rob Zombies first full-length album in nearly 4 years! It’s his third solo studio album. It’s so apparent that bands like Black Sabbath and Alice Cooper have influenced Rob on this album. Add some techno elements and you have Educated Horses, a more mature release for the zombster if you will.

There isn’t much range when it comes to vocals but with a sick beat you can always balance the two. “The Scorpion Sleeps” sent me into the late 80’s somewhere in Orangeville, Ontario, well the first few bars anyway.

Break into an instrumental piece, “100 Ways” mellows out the album. This has to be the softest side of Rob Zombie we’ve ever heard. But don’t get me wrong, there are some more classic tunes infused with modern rock tracks.

“Let it All Bleed Out” is the most in your face. It’s metal, it’s screaming, it’s fast and sounds like a catchy tune, unlike the rest. This and “American Witch” are probably the two tracks that sound more Zombie-like then the rest.

The synth in “Death of it All” reminds me of an old European ballad sound. It’s a different sounding song from the album; it’s got a romantical feel to it. Maybe it’s those blonde highlights he’s got these days, oh I’m kidding relax.

I’m not going to say glam rock, because he sure doesn’t dress the part, but some elements are present, combined with sleek techno/synth sounds. The album is decent, there aren’t any fancy sounds, over looped or over dubbed sounds, it’s just simple music. And no matter what his reasons are for not infusing it with over embellishments, if he’s proud of the record then so should be his fans. I think this album is cool, I can definitely hear tracks in movies, and I’m stealing a lyric right now for my new msn name. Give it a few spins.

Obviously if you’re a fan of Rob Zombie check out his latest feature film “The Devil’s Rejects”.

Oh and if you are wondering about some stellar drumming, that would be Tommy Lee. And if you like pretty pictures in the liner notes, ya got em, lots of pictures and lyrics that you will probably finish reading at the same time the album is over. 7 romantic strolls along the beach on horses out of 10.