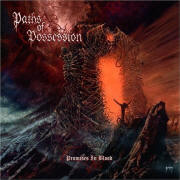 Paths Of Possession – “Promises in Blood”

Promises in Blood is the second album of Death Metal band Paths of Possession. The 2005 Metal Blade Records release comes five years after their debut album Legacy in Ashes. In between the two, Paths of Possession recorded a split EP, The Crypts Of Madness, with the band Dark Faith. The five-piece does not currently have a tour scheduled. The reason for this is that Paths of Possession vocalist George “Corpsegrinder” Fisher will be playing the Sounds of the Underground tour with his band Cannibal Corpse this summer.

In this review Paths of Possession is given 3.5 out of 5 for the music on Promises in Blood. There are twelve songs on the album that plays in a little under 50 minutes. The music can be described as a blend of American Death Metal, and Swedish/European Melodic Death Metal. The songs are well written and follow conventional forms for the style(s) used. George’s vocals are quite impressive on the album. He is noticeably clearer/audible than he is with Cannibal Corpse, but remains just as powerful.

The album starts heavy, and remains so throughout 11 of the twelve songs. The one exception is the minor mode “Erzebet”, likely named after the 16th century “Blood Countess”. The track is instrumental with a very effective depressing/dark guitar melody. While the piece is appealing, it could have been greatly improved with the addition of melodic vocals. Although most noticeable in “Erzebet”, there are melodic choruses and riffs in other tracks that would have also benefited from melodic vocals instead of growls and screams.

For considerations specific to the band, Paths of Possession receive 1 out of 2. Promises in Blood was mastered by Alan Douches who has also mastered Sepultura, Hatebreed, Clutch, Unearth, The Misfits, Mastodon, Shadows Fall, The Dillinger Escape Plan, Converge, and others. For this Paths of Possession receive a mark. The loss of a mark is due to “Corpsegrinder’s” involvement with the band.

It is undoubtedly good publicity to say that George Fisher is your vocalist. However, Cannibal Corpse is a very active band. As a result, Paths of Possession takes a back seat to them. Without a steady list of tour dates fans will ultimately lose interest in a band that they may never see live. Also, while George is definitely an excellent growler and screamer, Paths of Possession would benefit from a vocalist who could also add melodic vocals to the music.

Sound quality of this album gets 2 out of 2. There are no noticeable problems with the sound quality of Promises in Blood. Instruments and vocals seem to be well mixed and leveled. All tones and timbres are well suited to the musical style.

For the physical attributes of Promises in Blood, Paths of Possession receive ½ out of 1. The booklet contains legible lyrics, a picture of the band, and the usual thanks and credits sections. Designs/artwork used are consistent with Death Metal themes. While the front and back cover art is nicely made, the pages within the booklet are bland. The same background is used an almost every page (made up of a few occult/satanic-like symbols). There was clearly little effort used in planning out the booklet for Promises in Blood.

With a final rating of 7 out of 10, Promises in Blood is an album worth buying. The songs are well written and easy to listen to. Fans of Death, and Melodic Death Metal, should like this album. However, do not expect, as their website explains: “Cannibal Corpse part 2.” Also, do not expect to see Paths of Possession live as long as Cannibal Corpse is touring and/or recording.  [ END ]