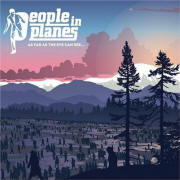 “It’s ok, to be safe, Cos I’m on top, of my game…” were the lyrics I heard over and over again while doing my Internship at Warner. You see Wind Up is housed on Warned turf and Wind Up headmaster Ron would have that song blasting, over and over again. And me being the inquisitive little shit that I am, googled the lyrics of the song to find out who could create such an awesome track, because the song has this haunting chorus and is so mellow yet has such a powerful ballad.

Hailing from across the pond, Cardiff to be exact, these 5 lads infuse the classic brit rock invasion sound, yet People In Planes add their own uniqueness to it.

Some bits of the album were written and recorded many moons ago, yet it works, and no one would be the wiser as to what was written when and how or where.

The album expresses the band’s feelings on what they’ve been through and what people can relate to, added with a lush modern rock sound.

In the early days of their teens vocalist Gareth Jones and guitarist Peter Roberts were inspired by Supergrass’ 1995 album I Should Coco, and from then the ball started to roll and the thought of being in a band was conceived. Here’s a little tidbit for you, Sam Williams produced As Far as the Eye Can See, along with the album that inspired it all, I Should Coco.

“Barracuda”, and no it’s not a cover of the Heart song, is the lead off track to the album, it has a bluesy feel to it. The whole album is catchy, indie-fused and well produced.

“If You Talk Too Much (My Head Will Explode)” is the lead single, it’s very catchy and radio friendly gaining lots of play on 102.1, as it should. The video was produced by none other than Joaquin Phoenix who is a big fan of the band. Wind Up also released the soundtrack to Walk The Line, which is a must see by the way.

Overall the album is an ambitious and an ear-pleasing piece. It’s full of catchy, ambitious tunes.

Although some claim the band to be the new Muse, or similar artists, and that they bring nothing really new to the scene, I beg to differ. Whatever happened with EMI in the past is in the past. This is one underrated album that deserves credit!