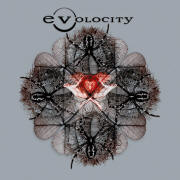 As music and its genres grow, so to do the ridiculous amount of styles and sub-genres. Over the past decade or so, rock has been through some serious changes. From Grunge to Nu Metal, rock music has been pushed and pulled into the big mess that it is today. Now however, with the recent emergence of a solid rock act named Evolocity, the complicated genre is about to come home. Evolocity started in the late 90s with two members, Jazz and Aaron and when Evolocity first began appearing in clubs and small shows, they were known as SPILL. Nevertheless, deciding that a change was in need, the guys moved to Phoenix from Vermont and there, Melon, Raydn 1, and Cor(e) joined the band and Evolocity was born.

Evolocity is sort of a bluesy hard rock band… sort of like Colin James, but they at times also sound a little bit like The Trews, or Red Hot Chilli Peppers. Now although Evolocity does sound sort of like the bands I just mentioned, they do in fact have their own unique feel about them. It’s almost like the music puts you into some sort of trance and all you do is listen to the music… wondering how the song sounds so unique, yet so good. So weird, yet so good. This is the kind of band that can easily be appreciated by other musicians as well… not that hard to give respect to a band that brings the true meaning of rock back to the genre.

Now, onto the debut self-titled album. The disc opens up with “Intro” – a distinctive guitar riff and ingenious drum beat… slow and catchy. As it ends, the intro flows extremely well into the first actual track on the album, “Too Far”.

This song takes a lot of the main body from the Intro and throws it into the mix and Aaron’s voice adds some unique qualities to the song. I actually felt like the band was right there with me the first time I pressed play. The pre chorus riff is actually sort of heavy and grabs the listener’s attention essentially luring them into the song and enticing them to want more.

Another great track is “Save Me”, which when I first looked at the track title, immediately made me think of Shinedown. The song however, is not a Shinedown cover. It is definitely Evolocity’s own tune! Although Aaron’s voice does at times remind me slightly of Shinedown’s frontman, the instrumental is nothing like them. The track is pretty darn catchy… it’s one of those songs you can sing along with when you’re in your car on the way to work. I can see this song being played on the Edge or Chum FM (Canadian radio stations).

The best track on the album in my eyes is definitely “Dark” and the name suits it extremely well… the intro is pretty damn dark if you ask me. The song opens up with a dark bass riff which instantly grabs you by the throat and has you sitting down in the closest available chair. It certainly got my attention and made me completely ignore all of my surroundings. Thumbs up for this one dudes!

Altogether, the album was done pretty damn well. I think I’m gonna give this beast of a debut CD a 7.8/10. Evolocity is freakin’ good, but does need to tighten it up a little bit. Not a lot though… just a smidge. Can’t wait to see what they deliver in the future! Thanks for your time people.  [ END ]