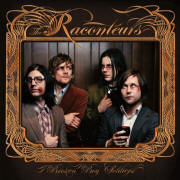 Jack White and Brendan Benson are both indie rock darlings in their own right, so when they publicly stated that they were going to combine forces and release Broken Boy Soldiers under the name of The Raconteurs, the hype was enormous. And thankfully, The Raconteurs’ debut lives up to the hype. With Jack Lawrence on bass, Patrick Keeler on drums, and White and Benson sharing duties on songwriting, guitars, vocals and keyboards, Broken Boy Soldiers is a collection of 10 songs, each of which present the best aspects of White and Benson’s music, and leave out the bad bits that are found in each individually. In my opinion, this is a stronger, more listenable album than anything The White Stripes or Brendan Benson (as a solo artist) have ever put forth. The ballads are heart-wrenching and perfect, the rock songs are full-blown and danceable, and everything in between is highly, highly enjoyable.

“Steady As She Goes” introduces the listener to The Raconteurs with a bang; fundamentally it’s an extraordinarily well-crafted pop song. With “Steady As She Goes”, I congratulate The Raconteurs on their excellent choice of an album opener. It’s without question one of the best songs found on Broken Boy Soldiers, and will be undoubtedly one of the songs you play most if you purchase this definitely purchase-worthy album. The next song, “Hands”, is a rockin’ little tune that doesn’t quite live up to the precedent that “Steady As She Goes” sets, but it’s agreeable nonetheless. And then comes the title track, “Broken Boy Soldier”, which has a grainy and sharp sound, wailing vocals, and a memorable quality. Though I wouldn’t classify it as one of the best songs on Broken Boy Soldiers, “Hands” maintains the level of quality here nicely.

“Intimate Secretary”, the fourth track, has Benson being lyrically humorous (“I’ve got a rabbit who likes to hop/I’ve got a girl who likes to shop/I had an uncle and he got shot/I’ve got so many things you haven’t got”), and has a pleasant, bouncing melody that swings along with the support of the instrumental racket being made underneath. It’s good, but “Together”, which comes next, blows it right out of the water. “Together” is a precocious and lovely ballad that has a simplicity about it which is utterly lovely. Benson and White also harmonize gorgeously here, and the melodic structure of “Together” feels both new and timeless all at once.

Changing things up, The Raconteurs next pound out “Level”, a blues-rock ditty that doesn’t have much to say, but is absolutely delightful in its vapidity; it’s the kind of song you dance around to when no one’s looking. Awesome! But even more awesome is “Store Bought Bones”, which comes next and is veritably fucking explosive. It’s powerful and memorable and gradually builds up to a pure rock n’ roll frenzy that is simply impossible to not love.

Unfortunately the last three songs, “Yellow Sun”, “Call it a Day” and “Blue Veins” are the weakest, least interesting songs on Broken Boy Soldiers. “Yellow Sun” is a bit folky and too pop for my liking, “Call it a Day” is somewhat boring, and “Blue Veins” doesn’t really hold one’s attention either. Meh, The Raconteurs could have done better here, as proven by the first seven songs of their debut.

Although it’s not faultless, Broken Boy Soldiers is a ride of an album that is definitely not be missed. Even if you don’t particularly like The White Stripes or Brendan Benson (I don’t), this Raconteurs side-project of White and Benson’s has produced a fun and enjoyable rock record. Broken Boy Soldiers is a definite achievement for the two aforementioned musicians, and it’ll be interesting to see what comes next for them and The Raconteurs. I’m hoping they keep on making music like this as opposed to the generic drivel we’ve heard from them otherwise. We’ll just have to wait and see.  [ END ]