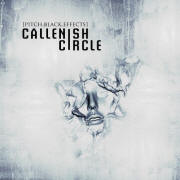 Europe is an incredibly established breeding ground for heavy and hard music. From the black metal of Finland to the melodic metal onslaught of bands hailing from Gothenburg, Sweden, the music is everywhere. Head to the north-western part of the continent, and you reach the Netherlands. Combining black metal synthetics with melodic metal is the band Callenish Circle. They formed in 1992, and had five previous albums and one demo already released, before this newest arrival hit shelves. Originally starting out as a cover band for artists such as Paradise Lost and Death, Callenish Circle moved on to eventually discover their “own” sound. This album was produced by Gail Liebling, and mixed by Tue Madsen (The Haunted, Mnemic) at the infamous Antfam Studios in Denmark.

Right from the Morse code-like lead in at the start of the title track “This Day You Regret”, you can gather what to expect from this album. Catchy synthetics blending in with heavy guitars that all fit together in perfect harmony. The guitar work is refreshing and technical, yet sounds simplistic enough to the ear. That combination is simultaneously one that I feel has been recently lost, and also one of the things that draws me to this band. Simple sounding bands like It Dies Today that actually put in a lot more work than you really get to hear, yet you can still tell it’s there.

Vocalist Patrick Savelkoul has one of those recognizable voices which embraces the music with the right tone. His singing style fits the sound that Callenish Circle deliver and does seem out of place with the rest of the band. To put it another way, I couldn’t picture In Flames minus Anders. He fits his band perfectly with his style of singing, and clearly makes the band more distinguished. A voice that can be placed to an image or band right away is something that a band should utilize. As stated, Pat does this and once I start hearing him sing, I get my mental picture of Callenish Circle. I like when this occurrence happens for one main reason… it keeps it in your mind that the band has something special about them that separates them from the rest.

The lyrical content of the album is well written, and it scours from topic to topic. You don’t hear the same song being sung like a broken record… the lyrical differences keep the album well balanced. Personally I hate listening to albums that stay to one main, unoriginal theme. This puts Pitch Black Effects and me on good listening terms!

I like this entire album, but one song above the rest. The standout track was “Sweet Cyanide”. The intro had feeling to it that first mellows you out, but then quickly switches into a fist-throwing, fight pace. The guitar work is tight-knit, and the drums keep good pace and speed to the music. Mid synth riffs also add more depth to the song.

All in all, Callenish Circle’s newest album is pretty rad. I really dig a lot of what they accomplished with their recording and post work. The sound they have is mellow enough for chilling out and just lying on your bed, yet heavy enough to make for an outstanding live show. I can just picture in my head the full pits when I hear the songs. This album gets a well-deserved and earned 8/10.  [ END ]