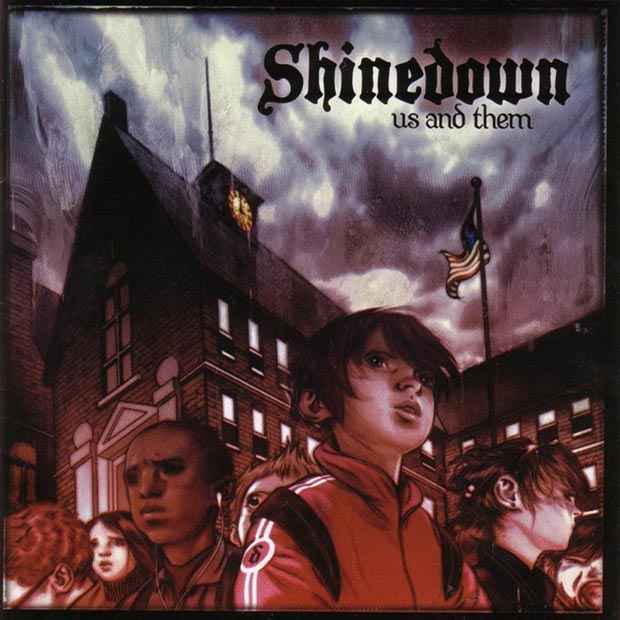 Shinedown – “Us And Them”

Us and Them, the latest album by Shinedown, has been pretty successful since its release. That could be for one of two reasons. It’s success is either because it’s a good CD, with solid songs and great lyrics – which it is – or that it sounds like somebody’s burned mix CD, featuring rock hits circa 2004/05 – which it does. No matter what the case may be, it seems to be working fairly well for the band. Makes sense… all the bands that make up this pseudo-compilation under the collective name of “Shinedown” were very successful in their time.

For example, the intro to “Save Me” sounds uncannily like that of Audioslave’s “Like a Stone”, while “I Dare You” sounds like it’s actually by the Tea Party – back before someone crashed the party. (Ha. That was cheesy, I know. I apologize.) “Atmosphere” has a ring of Nickleback to it… pre-“Photograph”, when their music had some balls. (I miss those days…) Meanwhile “Shed Some Light”, one of the album’s ballads, couldn’t be more like a song off Shades of Grey if Staind themselves were performing it. And even though this CD could easily be considered a mixed bag of songs that resemble songs we’ve all heard before, it still has a certain something-something that’s all Shinedown. I can’t put my finger on it, but whatever it is, it’s the reason that these guys are successful on their own, and aren’t just another second-rate band trying to get famous by playing someone else’s music.

The CD opens with a track entitled “The Dream”, a poem written by front man Brent Smith and recited by Olivia Battaglia, daughter of the album’s producer, Tony Battaglia. From there, the album is a blend of powerful, energetic songs with great guitar riffs – such as “Heroes”, “Yer Majesty”, and “Trade Yourself In” – and slow, sensual ballads with heartfelt lyrics – such as “Beyond the Sun” and “Some Day”. My personal favourites? “Shed Some Light”, for the beautiful accompaniment by cellist Paul Fleury, and “Begin Again”, for the sheer fact that it doesn’t sound like any of the aforementioned bands. Plus, the drums have some sort of crazy tribal thing going on, which is always cool in my books.

Despite the whole ‘this is our band, we sound like lots of other bands’ thing that Shinedown seems to have going on here, I still really like this album. Like I said, Audioslave, Staind, and all the rest were successful for a reason – and here you have them all rolled into one album, with a little something extra that Shinedown brings to the table. How could you go wrong with that?

Basically, I’d recommend this CD to any of the following people: fans of Staind/Audioslave /Nickleback and bands that sound like Staind/Audioslave/Nickleback, people (like me) who love to listen to their 2004/05 mixed CDs and wish they were still “back in the day”, or anyone who was upset when the Tea Party broke up. But if you’re looking for a purely original sound to expand your musical horizons… well, this probably isn’t the best place to look for it. Sorry.  [ END ]