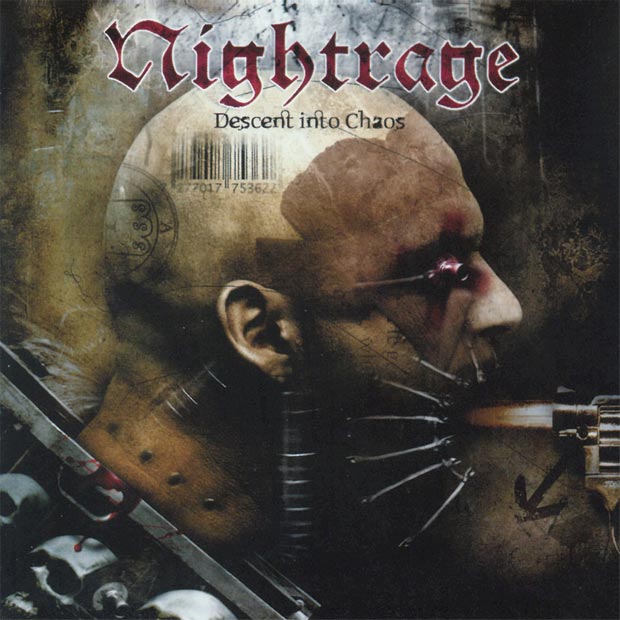 Descent into Chaos is the second album of Greek/Swedish Death Metal band Nightrage. The 2005 Century Media Records release comes two years after their debut album Sweet Vengeance. The five-piece Nightrage will be touring Europe with Bolt Thrower, Malevolent Creation, and Necrophagist starting in January of 2006 through until the beginning of February 2006.

In this review Nightrage is given 3 out of 5 for the music on Descent into Chaos. There are twelve songs on the album that plays in a little under 45 minutes. Most of Descent into Chaos is straightforward Death Metal. The songs are well written and follow conventional forms for the style(s) used.

The most noticeable inconsistency on this record is the difference in styles between the songs. The album starts off heavy, sounding like a typical Death Metal band. After a few songs however, a lighter Heavy Metal influence becomes very apparent. “Poems,” the third track, combines catchy riffs with chant style vocals for a Heavy Metal feel. “Frozen,” the fifth track, is a very radio friendly Heavy/Power Metal piece, quite different from the rest of the album. Nightrage regains the heaviness of the first few songs in the last few. The instrumental piece is a nice idea, and is well placed within the album, but sounds more like a casual jam than a written song. The last two songs are the heaviest, meanest songs on Descent into Chaos.
While the tracks on their own are well written and appealing, the lack of unity amongst them is a bit confusing when listening to this record.

For considerations specific to the band, Nightrage receives 1 ½ out of 2 for clearly getting around in the Death Metal community (especially in Europe). Their frontman is Tomas Lindberg of At The Gates. Nick Barker, drummer from Cradle of Filth and Dimmu Borgir, was Nightrage’s drummer for their debut performance of Descent into Chaos. The album was also recorded in the same studio that has been used by Arch Enemy, In Flames, and Opeth. All these big name contacts and the various guest appearances on Descent into Chaos ensure that the members of Nightrage will be constantly involved with projects worth checking out.

Sound quality of this album gets 1 ½ out of 2. There are no noticeable problems with the sound quality of Descent into Chaos. The guitars could be a little crunchier, other than that everything is fine. Instruments and vocals seem to be well mixed and leveled. All tones and timbres are well suited to the musical style.

The insert Nightrage chose receives 1 out of 1. It first opens like a booklet, then opens vertically to create a 3 page by 2 page poster style lyrics section. Designs/artwork used are consistent with Death Metal themes, there is a picture of the band, and all text is legible. They have also included who wrote each piece (in the insert), and how long each is (back CD cover).

With a final rating of 7 out of 10, Descent into Chaos is an album worth buying. The songs are well written and easy to listen to. However, because of the mixed styles and unusual flow of the album, listen to it first to ensure you enjoy all of it. Descent into Chaos appeals mostly to Death, and Melodic Death Metal fans, but Power and Heavy Metal fans may also be interested.  [ END ]