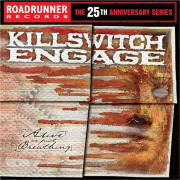 To celebrate their 25th Anniversary, Roadrunner Records have re-issued several of their classic releases over the years which are packed with lots of extra and previously unheard material. Killswitch Engage was one of the first bands to pioneer the genre that has come to be known as “metalcore.” The band released their first album on Ferret records. When it was time for a second album, Killswitch Engage unleashed the innovative album known as Alive Or Just Breathing.

The original release of Alive Or Just Breathing was released on Roadrunner Records in May of 2002. This album was one of those trend setting releases that stand the test of time. It will forever be known as an album that helped bring metalcore, the metal/hardcore hybrid, to the mainstream.

This 2 disc set features Alive Or Just Breathing re-mastered. Also you get new liner notes, art work, a bonus CD of b-sides and rarities, as well as all the music videos released for the record. Expect nothing less than great if you’re a fan of Killswitch Engage. The bonus disc is a great addition to any fans collection, and for sure warrants the purchase of the album’s re-release.

Alive Or Just Breathing has possibly the best combination of brutal and intense music with incredibly melodic style and melodic vocals that I have ever heard. Singer Jesse Leach, belts out everything from screams and death growls to melodic and catchy vocal parts that are so perfectly ear catching that POP music fans almost would enjoy it. You will be left dumfounded by his vocal range and ability.

Killswitch Engage are ready to carry the torch for metal for years to come. With songs like “Numbered Days” that instantly get you hooked first track into the album, and amazingly creative and touching melodies in their best single off of the album in my opinion “My Last Serenade”, to the all out brutalness such as the track “Life To Lifeless” and the track “The Temple From Within.” Killswitch Engage is heavy metal for the causal rock fan, and is hard rock for the die hard metal heads.

The main two things that standout to me on this album are #1 the production and #2 the vocals. The production is one of the best I’ve heard on a metal album. With all the trend of over produced nu-metal albums dying out, it’s refreshing to hear an album that is produced well enough to sound amazing, but is not over produced and too polished up. And as I said before in the review, the vocals are nothing short of amazing.

In closing, it’s an amazing ground breaking album – amazing tracks; a must have for any metal fan. The re-release is loaded with so many bonus features that if you don’t have the original, you must buy the new one, and if you do have the original, it’s still worth buying for all the extras.  [ END ]