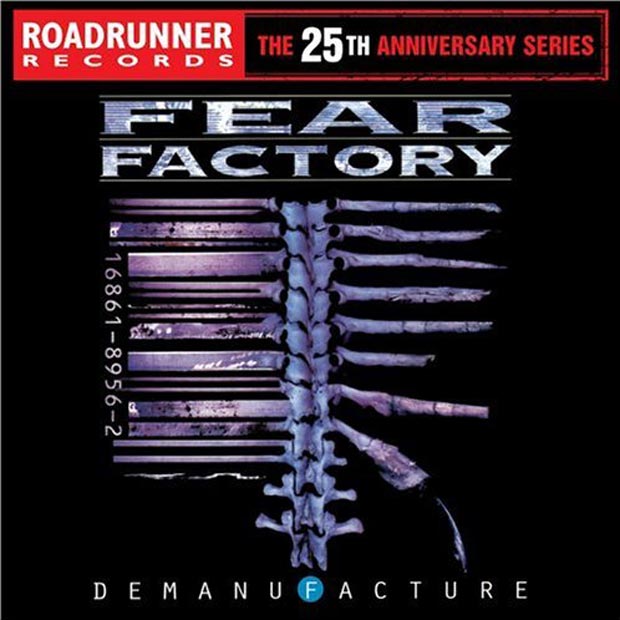 To celebrate their 25th Anniversary, Roadrunner Records have re-issued several of their classic releases over the years which are packed with lots of extra and previously unheard material. Demanufacture was Fear Factory’s second full length album and was originally released back in 1995.

Fear Factory’s first album Soul of a New Machine took metal in directions that it had not previously been. Demanufacture shows how Fear Factory stepped up and took the formula that made their first release Soul of a New Machine an underground metal classic, and further perfected it. The amazing quality of the production shows how now in 2005, this album still stands after the test of time.

For this re-release of one of the most ground breaking metal albums of all time, Roadrunner pulled out all the stops. This masterpiece is presented in a deluxe two disc set, with a total of 33 tracks. It is everything and anything a hardcore Fear Factory fan could ever want.

The new art work, material and packaging make this release more then worth getting; especially for the avid Fear Factory fan. Most of the material on this has obviously been released before, but is still worth every penny. Also, the re-mastering of the album brings a slight breath of fresh air to Fear Factory fans all over. The sound of this album is slightly improved over the original, which was still nothing short of amazing.

All that made us love Fear Factory from their gloomy gothic industrial sound of bands like Godflesh and Bauhaus to their heavy metal hook ridden songs with the melodic essence of an 80’s top 40 pop chart is still present in this amazing album.

I’ve never enjoyed listening to such classic songs like “Replica” so much; Fear Factory’s first song that was ever made into a video and helped get them out there to the masses. Other notable tracks are amazing songs like the album’s self titled song “Demanufacture.” Right off the bat this kick-ass, heavy song’s melodic vocal line grabs your attention.

My personal favourite track off the album has to be “Body Hammer.” Pure metal with an insanely catchy chorus; it’s a track that sums up the whole feel of the album for me personally.

Demanufacture is and always will be one of my top favourite albums of all time. It really shows the band in their prime. Even my favourite albums I usually rate no higher then a 9.5. I feel even the best albums could leave room for slight improvement. This album would be a 9.5 to me, but for this special re-release, the re-mastering, new art work, the whole package, I’m going to have to say a 10 out of 10 for sure.  [ END ]