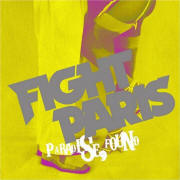 The 2005 Trustkill record’s release, Paradise, Found is the debut album of Hardcore/Rock ’n’ Roll band Fight Paris. The overall style and sound of Fight Paris is similar to that of Every Time I Die. The difference is Fight Paris is a little more Rock ‘n’ Roll, and therefore slightly less heavy.

The five piece band from Atlanta, GA formed five years ago and went through several member changes before they were picked up by the label of It Dies Today, Throwdown, Eighteen Visions, and other similar minded musicians. They have played live with Chimaira, God Forbid, Cold, Dope, School For Heroes, 36 Crazyfists, Underoath, Hotwire, [Minus.Driver], Scatter The Ashes, and others.

Total running time of the 10 songs is 33m, 03s. An extra song could perhaps have been added, but anything more than that and the album would loose its edge and sound redundant. The opener, “Fuck Me Stilettos” sets the pace for the entire album. All songs are upbeat/energetic, they make you want to dance, kick, mosh, or engage in some other type of full body movement. Songs are to the point, riffs and melodies are not overused, and breakdowns are simple and effective.

There are a couple of short non-musical interludes in the album between songs. They both are well placed within Paradise, Found, and as with the songs; they are to the point. All lyrics relate strictly to ‘Rock ‘n’ Roll’ topics as the track “Better Than Elvis” (track 5) states, “…whether its drinkin’ fuckin’ or drugs.”

While the music on this album is well written and produced, there is nothing breakthrough or particularly innovative about it. For this reason Fight Paris may have a difficult time maintaining longevity. This is not to say that all artists with new creative ideas will last, but it helps. Since Paradise, Found is Fight Paris’ debut album it is too early to determine how this band will fare after some more records. There are no noticeable problems with the sound of Paradise, Found. All instruments and vocals seem to be well mixed and leveled. All tones and timbres are well suited to the musical style.

The front and back covers of the CD are a yellow-green hue with dark gray text. The booklet pictures of women and pairs of women scantly clad and ‘in the mood,’ fits well with the Rock ‘n’ Roll themes of the album. The centrefold shows the surprisingly geeky looking members of Fight Paris. The back of the centrefold picture is set up in the same way as a magazine pull out add and has ‘Fight Paris’ written on it. This setup is a bit clumsy.

If the booklet is opened to the centre page and the centrefold is kept closed only a portion of the words ‘Fight Paris’ can be read (specifically ‘HT PA’). A complete design would have been more appropriate than a partial image for the centre page. The text, whether song lyrics, song titles, or thanks’ are difficult to read at times. While this appears to be intentional, it is still frustrating. A larger font or a more conservative use of the ‘dirty’ effects that cover all areas with text (except for the front cover) would have helped.

For anyone who likes Rock ‘n’ Roll, and songs about it, Paradise, Found is an album worth buying. The tunes are well written, fun, and easy to listen to. Even though no new musical ideas are presented, the quality of Fight Paris’ Paradise, Found is enough to overcome this.  [ END ]