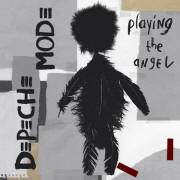 Despite the fact that the synth, ‘80s sound of bands like Depeche Mode has largely faded and become a thing of the past, Martin Gore, Dave Gahan and company have continued to stay relevant while still producing groundbreaking and original music. It’s been four years since Depeche Mode released the disappointing Exciter album that wasn’t very well received by die hard fans of the band. Now four years later, the rock/electronic band has in a way gone back to the basics with Playing the Angel, an album full of the dark, brooding sounds that fans of the band have become use to. While the album does contain a few mediocre tracks, the twelve track Playing the Angel remains a solid album that displays well the excellence of Depeche Mode.

The best songs on Playing the Angel come in the first half of the record. The album opener “A Pain That I’m Use To” starts off with an extremely loud, ear piercing electronic siren sound reminiscent of Nine Inch Nails before calming down to a soft electronic drum beat. The song continues to build up and it has an excellent chorus. The next song, “John the Revelator” is a little more upbeat and has a classic Depeche Mode dance beat that fans have become use to. Track four “The Sinner In Me” happens to have a sinful sort of sound to it with its menacing beat and atmosphere. It has an extremely dark feel to it and it displays Depeche Mode at their finest.

One of the top songs is track five, the disc’s first single “Precious.” Gahan sounds wicked on this song and it really is worthy of being considered one of the band’s greatest songs, right up with “Personal Jesus” and “Policy of Truth.” Other solid tracks include “Macro,” a ballady kind of song with some of Gahan’s best vocals on the album. The Dave Gahan written “I Want It All” moves kind of slowly, but is oddly compelling. The other Gahan songs “Nothing’s Impossible” and “Damaged People” are both decent songs, but neither rank among the best of the twelve on Playing the Angel.

While much of Playing the Angel is quite solid, there are also a few weak songs. “Suffer Well” starts to get good at times, but it doesn’t flow very well. The short instrumental “Introspectre” is just filler and doesn’t really belong on the album. The last two songs on the disc also seem like filler tunes as neither is particularly good or catchy. “Lilian” sounds very ‘80s-ish, but just not all that catchy either. The final song “The Darkest Star” is very dark sounding, but it kind of lulls you to sleep and never really goes anywhere in almost seven minutes. Despite the fact that the last few songs are a bit weak, Playing the Angel is a solid album that should please any Depeche Mode fan. At times, it rediscovers the true greatness of the band when it was in its prime with only a few misses along the way.  [ END ]