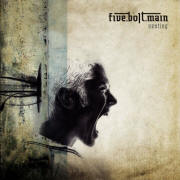 Five.Bolt.Main is a band that hails from Louisville and in my opinion, their first release on Rock Ridge Music is a strong debut. The band is fronted by Chris Volz, formerly of the band Flaw. The production on this album is great and everything sounds right where it should be; very clean and crisp sounding.

Flaw released two albums on Republic/Universal Records and sold about half a million copies before they split up in 2004. Five.Bolt.Main seems like a good place to start off for those Flaw fans who miss having Flaw around, and are looking for something to fill the void.

The album is called Venting, features 12 tracks, and runs about 45 minutes in length. The music sounds similar to Flaw in many ways, but it’s mostly the vocals that gives the impression that you’re still listening to a Flaw record. Any fan of Flaw should check this out because you will love this album for sure, it’s really solid sounding and time and time again, Chris Volz proves what a great vocalist he is.

The guitars are very similar to what Flaw was all about; hard rocking, huge driving guitar sound with that nice low bass filling it all up. The drums are really tight and flow just like Flaw, this could be because original Flaw drummer Ivan Arnold is also the drummer in Five.Bolt.Main.

Vocally you can hear Chris Volz perform incredible melodies like you would be use to hearing on any Flaw album. There are still many rocking tracks, but over all the CD has a hard rock kind of feel with lots of melodic and groovy songs.

I feel Five.Bolt.Main can take over where Flaw left off for the many fans who were left in the dark after Flaw broke up. Check out this album, over all it’s pretty solid and should leave Flaw fans and melodic hard rock fans very pleased. I’m interested in seeing how the band develops on their next release. [END]